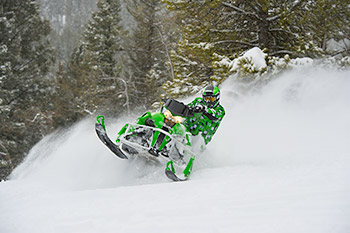 We don’t see any major chassis changes from Cat’s trail sleds because the ProCross is darn good the way it is.

However, we think there may be a major revamp of the mountain segment targeting major weight reduction and, we hope, a new DSI 800 2-stroke.

We think Cat will finally say good-bye to its models based on the Twin-Spar platform and there’s not many left – mostly utility sleds and the baseline fan-cooled Lynx 2000 series.

The Pantera may be offered with a 600 CTEC 2 this year, perhaps as a shorter tracked version (137) focusing on lightness and one-passenger versatility.

We think its time for Cat to begin using some other Yamaha engines besides the 1049cc triple it has had so much success with. This is the third year into the Yamaha deal and Cat’s agreement with Suzuki will be ending sooner than later.

Thus, we’re looking for one of three engine options to take place. First, a new Apex powered model in a heavily (no pun intended) modified version of the ProCross. This would be an exciting direction for Cat and even more so, for Yamaha.

We think the biggest 4-stroke rumor would be Cat’s use of the Phazer’s 500cc twin in a lightened up and stripped-down ProCross. We’re leaning toward a displacement bump on this engine, however – to around 700cc – with the power output kept somewhere in the 90 to 100-hp range.

There’s a third engine possibility and we think it makes more sense than the 500 rumor – and it would be a bolt-in. Cat has had big success with its 5000 series 4-stroke twin but we think Yamaha’s carbed triple from the original Vector, Venture and Viking would be a great utility-entry-level engine for Cat to utilize.

This mill is the ancestor of the popular 1049 triple and could be a low-cost alternative to the 5000, still making power in the 110-pony range.

That’s all we’ve got for Cat but don’t be surprised if this on-the-ball company isn’t ready to go in a completely new and unexpected direction.

Kent Lester
Kent Lester is Co-Publisher of SUPERTRAX Magazine and a regular contributor to this website.
Previous articleTEST RIDE: 2015 Polaris Switchback 800 Pro-X
Next articleWHO IS THE MOST AGGRESSIVE IN 2015?