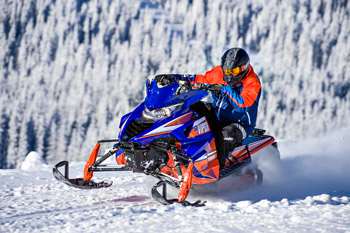 It’s been a few days since Yamaha took the lid off its 2015 snowmobile menu and we’ve been gauging your web and Facebook impressions of the new sleds.

In order to understand why Yamaha didn’t come out with a slew of new engine-platform variations in MY2015 is because it takes longer than you think to do the testing, troubleshooting and perfecting of any new snowmobile model.

The time period has always been about three years before a new model comes into the market. Remember, Yamaha only got this deal done about a year and a half ago with Arctic Cat. Thus, both companies are pretty limited with the new variations they can release to their dealer network.

Second, Yamaha really has needed to address the mountain market. The new Viper MTX SE 163 puts the company squarely in the hunt in this burgeoning market and opens the door for sales in a category it hasn’t had a strong presence in.

Delivering these new mountain roosters is a bigger deal than you’d think and it’s important Yamaha does it right. There’s a very intense focus at the BIG Y on delivering very competitive 4-stroke mountain sleds.

If the new MTX series Vipers can meet the expectations of even half of this market, it will be a very big deal and a harbinger of more stuff to come.

Turbos. Both the mountain and the flatland market are salivating for a Turbo-Viper and Yamaha is making one available on an early-buy program. No, it’s not the same as a production sled being available right out of the marketing brochures.

However, it is a very viable, proven system and at an extra two grand, puts the ultimate Viper close to the price range you’d be paying for a Yamaha hypersled. Word is the turbo brings the 1049 triple’s power into the 160-175-hp range.

Some readers feel the “Performance Damper” is a mere band-aid to “fix” problems on an existing sled.

Here’s what we think: This proven automotive technology is already in use in some pretty sophisticated cars. Why not experiment with it on snowmobiles? Short range thinking says it adds weight and only masks problems. Long range thinking says this feature could revolutionize the way snowmobiles ride and handle in the future.

Tomorrow’s designs could well incorporate PD into a new chassis where fresh design allows for the extra weight. We just won’t know until consumers have had a chance to measure its effectiveness.

The key to Yamaha’s 2015 line-up is time! The company needs time to perfect and deliver durability in what it’s offering and time to develop new models.

All things considered, at the very beginning of year-2 of a very revolutionary new journey, Yamaha is doing a lot.