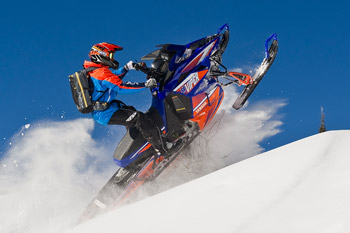 If a company entity could smile, Yamaha’s snowmobile division would have the biggest, toothiest grin imaginable. It has literally re-birthed itself in slightly over a year and the Arctic Cat co-build gamble has paid off big-time.

The Viper has been nothing short of a miracle for Yamaha and the best part is those Yamaha customers who took the plunge into the new hybrid platform absolutely love the 2014 Viper.

So far, the sleds have, for the most part, proven to be Yamaha-reliable and the use of the Yamaha 1049cc 4-stroke triple has been an amazing success for both Arctic Cat and the Big Y.

For 2015, Yamaha is concentrating on filling gaps in its product line. No, there are no new engine-chassis combos to twist your mind this year.

The most drastic shift is that the Nytro, in all of its versions, has been completely erased from the product brochures. All the other 100-percent Yamaha models from 2014, including the Apex, Vector, Venture and Phazer are still offered in 2015.

What about the gaps? Until now, Yamaha has not been considered a serious player in the mountain market, mostly because of its determination to avoid 2-stroke tech.

The extra weight of a 4-stroke has presented challenges and this year, the new Viper MTX should open some doors in the vertical marketplace.

More than just a Viper with a long track attached, the new MTX offers a repositioned skidframe, the rear heat exchanger has been eliminated and the extra-long tapered tunnel has highly perforated running boards. Ski-stance is adjustable (38-39-inches) and mountain-exclusive wide skis are used.

There’s a super-short, lightweight mountain seat with a very narrow side profile and the MTX uses a mountain-specific slide rail (much higher where the front arm attaches) along with a redesigned front arm to allow the sled to climb-out better when dead-stopped in powder.

The MTX is available in both SE and base MTX variations (SE uses Fox Float 3 shocks up front, Float 2 on the skid’s rear arm and a coilover gas on the front arm). The base MTX uses coilover gassers all around.

Two lengths are available in the SE: 152 and 163-inches. Both SEs come with a 2.6-inch lugged PowerClaw (15-wide). The base MTX is only available as a 153-incher but it also uses a 2.6-inch PowerClaw. A totally cool-looking (orange, blue and white) LE package is available.

We’ve seen video of this sled being ridden in the mountains and it looks impressive. We think the MTX may open some doors for new thinking in the mountain market.

Although it’s not expected to perform as well as the ultra-modded featherweight 2-strokes factory-available from some OEMs, we think the Viper MTX will prove to be a very competent climber in all but the most extreme mountain applications.

One thing is for sure: Yamaha is into the mountain market!

Kent Lester
Kent Lester is Co-Publisher of SUPERTRAX Magazine and a regular contributor to this website.
Previous articleHOW TO GET POWER OUT OF A 4-TEC
Next articleQuebec’s Jewels of the North