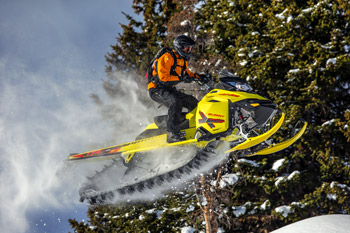 Ski-Doo sales have been so dominant the last half-decade, the company can literally take baby steps updating its product and still maintain industry-leading market share.

One area Ski-Doo would love to have a stronger presence in is the mountain market. Its Summit line has been growing steadily and, depending who you’re listening to, may actually be in a first-place position in this highly specialized segment. Nevertheless, Polaris and Arctic Cat are keeping everyone dead-honest with their incessant improvements and innovations.

In 2015 it looks like Ski-Doo has taken a giant fly-swatter and splattered the competition with a mountain sled so radical it borders on the absurd. The new Summit X 174 is more than just a sled with a ridiculously long track.

Ski-Doo’s engineers have shaved a significant amount of weight from the Summit platform and the tMotion skidframe. How? There are no idler wheels in the middle of the skid and the rear wheels are much lighter.

The rear arm is now made of thin-walled chrome-moly and there’s been an overall weight reduction of 3-lbs from the skidframe. The muffler has lost significant weight and the rear heat exchanger is 50-percent shorter than last year.

The tMotion on the 174 is actually bolted about 5.2-inches further rearward for maximum weight transfer and climb-out. There are new Pilot DS3 skis this year with a 12mm deeper keel.

Standing next to the 174 is a freaky experience. The length of this 3-inch deep, 16-wide track is arresting. Someone commented the sled should come with a sleeper on it; there’s enough room to stretch out on the back of the tunnel and take a nap.

We spoke to Carl Kuster, who has ridden the 174 and he told us it’s simply unbelievable where you can go with this sled and the extra length, rather than being burdensome, is an asset in the mountains. We’ll take his word for it.

Ski-Doo is on a march in the mountains and the new Summit X 174 is going to get a lot of attention this year.