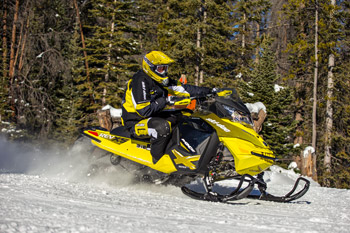 Ever since Ski-Doo introduced its rising rate rMotion skidframe three years ago, the industry bar has been significantly raised in snowmobile rear end ride compliance. rMotion offers amazing ride control with no fear of bottoming and its easy adjustability has made it incredibly user-friendly.

Ski-Doo’s biggest problem has been rMotion is so unbelievably competent, the REV-XS’s front end ride and handling has taken a bit of a back seat in the evolution of the platform.

This year, Ski-Doo has made a bold step to modify the front end on all its XS models bringing it into full equilibrium with rMotion. The new front end weighs 1.75 lbs less and is called RAS2. Its most major change is the lengthening of the spindles, placing the A-arms 12mm further apart.

Although this seems like a small change, it’s actually huge. Since the sled’s “roll center” has now been raised 38mm (Note: Don’t confuse roll center with center of gravity.

A higher roll center is a good thing and a low C of G is most desirable) the sled corners even flatter and bump steer is reduced because the front end does not experience as much camber change as it cycles through its travel. The net result is a sled that is more stable in big bumps as speeds increase and has less roll when you’re throttling hard through the corners.

RAS2 is now standard on all MX-Z, Renegade, Summit and GSX models using the XS platform.