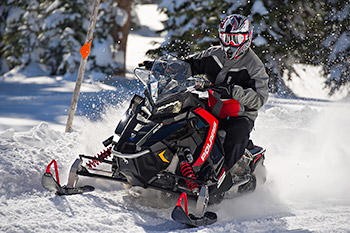 Now that I’ve had a chance to put a few miles on the production version of the 2015 AXYS Switchback on our own home turf a couple of weeks ago, it has completely changed this rider’s initial impressions of the all-new sled.

Frankly, I was definitely from Missouri after riding the sled last winter in Montana. Although it was a completely fresh design and weighed a lot less than the 2014 Pro-Ride RUSH, I inwardly felt Polaris might have bitten off more than it could chew.

In one year the company had tackled a completely revised suspension design, new ergonomics, repositioned the engine and added a claimed mega-boost in horsepower from its 800. That’s a big list of mods to get right first time out.

After Supertrax had ridden prototypes last March in West Yellowstone we were impressed with some aspects of the new sled, but we (at least, I) had hoped the production versions would be even better. I bit my tongue and kept quiet until I could be sure.

Frankly, I felt the rear end of the sled wasn’t a “wow” yet and my first impression of the prototype was its front end had lost some of its famous RUSH handling precision.

Here’s my opinion of the new AXYS after riding it: It is awesome! This rear end works two or three times better than the former Pro-Ride and is as plush as the best suspension in the biz – maybe more so.

Not only does it not bottom over harsh stuff, it rides like you’re sitting on a pile of eider-down pillows, all this without feeling mushy or vague. Unlike the former RUSH, there’s way less set-up required to get this back end perfect. Suddenly I’m a fan of Walker Evans.

The front end has been precisely dialed-in and is every bit as good as any of the best Polarii I’ve ridden. The engine is strong but I can’t really tell you how good it is until it and our other comparable hypersleds are broken in.

Other things I love about this sled: The brake’s action and its feel at the lever are flat-out incredible – probably the best brakes in the business! The seat is comfortable and allows the rider to move around easily. The riding position when seated is warm while providing really good legroom. The full color gauges and built-in GPS are just awesome.

Yup, I’m a fan. Hats off to Polaris for delivering a real breakthrough sled in its first year. This one will deliver maximum satisfaction and anyone who ordered a new AXYS will be raving to their friends about how good it is.

Kent Lester
Kent Lester is Co-Publisher of SUPERTRAX Magazine and a regular contributor to this website.
Previous articleSKI-DOO X-TEAM RACER REPEATS AS DOMINATOR CHAMPION
Next articleIS TURBOCHARGING THE FUTURE?