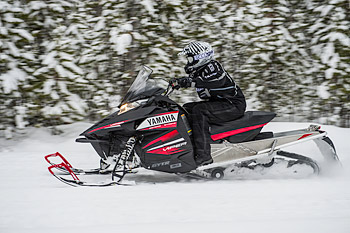 The bright blue with white accents Viper RTX SE (also available in red and black) will feature Fox Float 2 air shocks on the front and Fox IFP gassers in the skidframe, along with a 1.25 x 129-inch RipSaw track. The skidframe is Yamaha’s adaptation of the ProCross Cat’s Sliding Arm setup using coupler blocks and torque links merged with a sliding front arm.

A base 129-inch model called the SR Viper is offered in black with red accents utilizing IFP gas shocks up front and IFP gassers in the skidframe calibrated for a plusher trail ride. A 1.25 RipSaw II track, a heated seat and a higher windshield are standard on this sled.

This sled has the same fully equipped skidframe design as the 129-inch RTX SE series and sports a 137×1.25-inch deep track. Rebuildable, aluminum high pressure gas shocks are used in the skid and Fox Float 2s up front.

Even the slightly tamer base model Viper LTX (black with red accents) still includes a 137×1.25 inch RipSaw II, gas shocks front and rear, a heated seat and a mid-height windshield.

The RS Viper XTX SE (available in choices of blue/white or red with black accents) offers a dual shock 141-inch skidframe and track, Fox Float 2 air shocks up front and a Float air on the rear arm. This one also uses plastic mountain skis (slightly wider) and has a tall handlebar riser for stand-up riding.

Kent Lester
Previous article5 THINGS WE DIG ABOUT YAMAHA SLEDS
Next articleWhat’s Ski-Doo Up To For 2014?