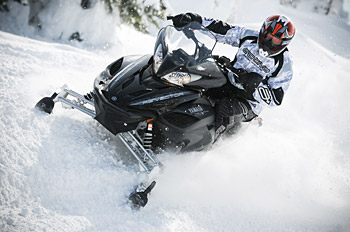 The Vector is very good at meeting the expectations of riders who want a sled that offers optimum comfort and very good performance on trails.

First, it’s 4-valve EFI triple is a precision work of art and its rear exiting exhaust makes some of the best noises money can buy in any powersports medium.

This 1049cc, 130-horse powerplant is powerful and despite the extra weight the Vector carries, it is completely in the hunt with comparable sleds in acceleration and top speed.

One feature we like is Yamaha’s Engine Braking Reduction system. This valve system lets a small amount of air pass through the throttle body area on deceleration and allows the rider to ply the throttle much more smoothly when the throttle is off.

The inherent tendency of a 4-stroke is to jerk the sled down in speed on entry into corners when the rider is off-throttle. As with the Arctic Cat 1100, this anti-engine braking feature on the Vector allows it to behave much more like a 2-stroke.

Surplus weight is a continuing discussion and really makes the Yamaha see taillights when the trails are rough or the ditches are moguled up.

Its monoshock skid hasn’t been affected negatively by the shock “downgrades” this year but the ultra-light and nimble XP and RUSH – even the 4-stroke Procross Cat, like this environment much better and produce synonymous results.

Get over it. There’s nothing wrong with the way the Veck works. If it had been designed with about sixty less pounds and Yamaha was bragging it as a ditch-banger, then we’d be critical.

As it is, this sled offers years of plush trail riding, plenty of mid-range performance, time proven reliability and great trail handling.

You can ride the Vector in the bumps and it will produce decent results but go to the max and it’s simply out of its element.