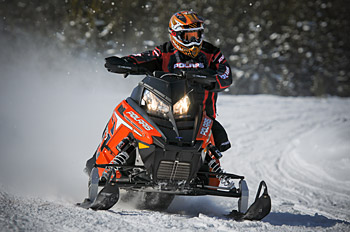 Everything about the RUSH seems unconventional until you take a seat behind the controls. It’s here the sled displays its ability to become one with its rider.

We’ve already discussed the new front end handling improvements but the 125-hp Cleanfire twin the platform originally started with is an incredible motor. This 4-injector SDI Liberty is surprisingly close in its emissions to a 600 E-TEC and its fuel economy isn’t far off, either.

The good news is Polaris has an even better new-generation EPA certified 2-injector 600 already in the marketplace in its 2012 mountain sleds.

We’ve found very little to complain about with this mill and despite some nearly indiscernible midrange throttle lag issues a couple of years ago, it’s been a plowhorse of reliable power and function.

We’ve been learning the ropes setting up the RUSH’s Pro-Ride rear suspension and have continued to be amazed how well it can work on roughed-up trails.

There’s just enough transfer in the rear end to keep the skis light and when you’re engaging deep whoops, the biggest challenge is adjusting your mind to keeping the throttle pinned and trusting the suspension’s ability to make you look like a pro snocrosser.

From the cockpit the RUSH feels a bit tall and it really lends itself well to stand-up riding. The truth is, the back end handles big bumps so well, you don’t have to stand up much.

If you’ve got the rear exposed shock spring preload right, there’s no fear of bottoming and even on the fastest, most gnarled- up approaches, the sled launches straight.

The RUSH is so good in extreme trail junk you could almost overlook its performance in light chatter and stutters.

Unless you’ve dialed this suspension properly you can end up frustrated with the way it handles this kind of terrain at low and medium speeds. Get it right and it’s pure heaven.

Our recommendation is that you do not simply accept the factory delivered settings as being perfect for your personal weight and riding style.

You need to ride this sled, make adjustments and then ride it again. Certainly, there’s plenty of potential for tailoring this ride exclusively, but you need to work at it until you’ve figured it out.