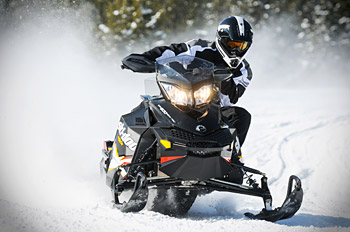 We chose this sled as our pick for Supertrax BEST Trail Power sled and, based on our early knowledge of the two sleds, it was a close battle between it and the RUSH 600 for the prize. It still is.

We rode the 600 RUSH first and, with its spot-on 2012 suspension revisions, were convinced we had made a fatal error. The new RUSH is an amazing sled.

A couple days later we rode the 600X with rMotion and were simply blown away.

Although the Ski-Doo’s aggressive skis are a bit darty, once we dialed down the stock damping settings on the shocks using the running board mounted adjusters, we were totally impressed with the new suspension’s ability to iron out trails.

This sled lacks nothing in compliance both at low speeds and high and its lightweight, agile XP platform is as good as ever.

Our biggest surprise was the power delivery of the 600 E-TEC. Although this engine has always impressed us with its super-clean EPA numbers, lack of smoke and incredibly low consumption of fossil fuels, we had been lulled into satisfaction with its flat power curve and credible performance output.

We’re not sure if it’s because of clutching adjustments, low friction from the new skid or an actual Rotax engine tune-up but this year’s version rocks!

This 600 pulls extremely hard from bottom to top and leaves little lacking when compared to even its 800 sib.

Although there’s no arguing with a 40hp power differential, there are some things we just flat-out prefer about the 600.

The X’s ergonomics are extremely comfortable and we give high praise to the seat on this sled compared to the butt-sliver race seat on the XR-S.

We think overall the MX-Z X represents the highest evolution of the XP platform and we absolutely love the 600.