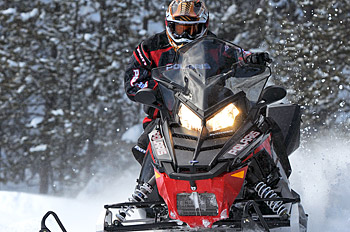 You could argue this sled lines up pretty much against Ski-Doo’s GSX series or Cat’s LXRs but the fact is the Adventure offers features that separate it from the others.

Certainly, the most noticeable items are its set of aluminum racks and its hard shell luggage kit. The idea here is the Adventure makes no apologies for being targeted at the touring crowd – it just wants to appeal to those who like to tour solo.

With the flick of a few Lock & Ride buttons, the Adventure can be converted from a tourer into a short journey trail sled or even a Crossover. However its appeal is undoubtedly toward the long distance rider.

With the bags in place (each bag has a liner inside that seals the cargo airtight and free of snowdust) you can ride hundreds of miles and then go cross-country off-trail if the grooming runs out.

Its 136-inch track guarantees flotation in powder snow and the Switchback’s uniquely designed “stretched” chassis, with its extra length in the middle of the sled instead of sticking out the back, enables it to handle like a 121-incher.

In fact, handling may be the keynote of the SW Adventure. Polaris has fine-tuned the Pro-Ride front end this year with new spindles and upper A-arms and sharpened the sled’s turn-in while easing steering effort.

This translates into less fatigue on long rides and a sense of oneness with the sled when navigating tight trails.

The rear suspension’s shock calibration puts it in the hunt with some of the best riding sleds in the biz and certainly makes it the plushest riding of Polaris’ external shock, RUSH-based models.

As for the Adventure’s 600 semi-direct injected 2-stroke; this strong, responsive engine gets fabulous gas mileage and is an absolute miser on oil – two features that make it even more appealing to long-distance riders. It’s the only engine available in the Adventure configuration.

Although it isn’t cheap, the Adventure does enable its owner to do a number of different kinds of riding capably.

This kind of versatility – and more than that, its competence in each job description, makes it unique and very appealing.

Staff Report
Previous articleWhat Sled Should I Get For My Girlfriend?
Next articleLONG LAKE POKER RUN