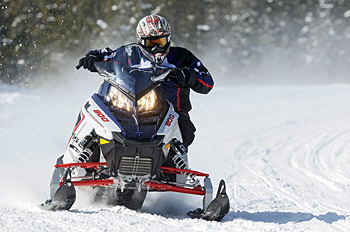 In 2012, this class provided the closest competition I’ve seen in years. This reality provides a huge opportunity for Kent to be hopelessly confused.

Both of these sleds are exceptional in every area of comparison we subjected them too. For sure, Ski-Doo has nailed the engine equation with E-TEC, yet Kent will completely overlook this reality: The Rush actually launches harder as a result of its uncoupled Pro-Ride external shock skid and can pull the Doo past 70 per.

Okay, the E-TEC does get killer mpg. Don’t forget this reality though, the SDI Cleanfire certifies EPA 2012.

No one can get away from the Pro-Ride’s bottomless feel either. The skid simply swallows huge craters and stuff you’re sure is gonna hurt, even while you’re seated.

Lastly, Polaris has completely redeemed the Liberty 800. The engine was 100-percent bulletproof last season, never missing a beat in our fleet. Even belt wear was ridiculously good. There were some E-TEC 8 issues.

So, Kent will crow about the Ski-Doo MXZ-X E-TEC 800 and its rMotion skid. However, Polaris earned this BIC for much more than it’s innovative rear suspension.

Hmm. Mark seems pretty sure on this decision. I certainly hope my dead-true logic doesn’t crush him too much.

Mark, we’re talking about the lightest snowmobile in the business tied to the most sophisticated 2-stroke snowmobile engine on earth. One plus one still equals two, not three. No wonder you flunked math.

There’s a reason why the MX-Z 800 E-TEC outsold every other big-inch sled in the business last year: It is, simply stated, the ultimate hypersled.

Then Ski-Doo ups the stakes by adding the trickest rising rate skid ever to slide its rails across white-top, rMotion. This profound improvement in a snowmobile that essentially needed no improvement speaks volumes about Ski-Doo’s design team and its iron will to be at the top.

Yes, we heard about some first-year engine glitches and a few customer complaints on the all-new 800. There were still zillions of them that worked flawlessly and Ski-Doo worked double time re-mapping and warranting those issues that nagged.

The 800’s performance is eye-widening, nosebleed inducing and arm stretching from top to bottom.

The MX-Z with an E-TEC 800 was and is the most deserving of this award. I will stand by my decision until Charles is king!