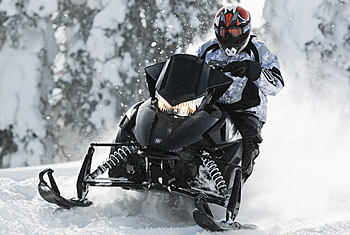 Maybe you think we should be talking about the Sno-Pro version of this sled and not the toned-down LXR.

Fact is though Cat has reduced the ride compliance gap between its 2012 Sno Pro and LXR ProCross sleds.

Based on our own riding experience with Arctic Cat SnoPro models of the past, we’d been critical of the somewhat harsh bump calibration of the air-shock equipped SP series.

The old logic had been that performance customers demand a stiffer setup to get zero bottoming on square-edged hits and big-air landings.

The truth is, even the most aggressive riders aren’t happy sacrificing plushness through the stutters to achieve zero possibility of bottoming.

Perhaps a bigger influence is the fact the competition has recently been able to offer low and medium speed bump compliance without bottoming out on the big stuff.

With a sliding front arm (Slide Action), torque sensing links (TSL) and 2-way coupling melded with precise Fox Zero-Pro IFP gas shock calibration, Cat definitely has the proprietary technology in its arsenal of suspension tricks to get the job done with the ProCross LXR.

After riding both, we chose the LXR because it offers a great balance between anti-bottoming and plush ride. You can take an 1100 LXR and push it very hard in the bumps and it will respond beautifully – no swapping, no bottoming, no fear.

Of course, much of this is due to the all-new chassis the ProCross design team, led by Roger Skime and Troy Halverson, has come up with.

They started with a completely new blueprint, engineering out weight and building in balance. This is particularly important when juggling the extra mass of a 4-stroke.

After riding this snowmobile extensively both in Thief River Falls and in West Yellowstone last year, we’ve concluded it’s the best handling 4-stroke in the business right now. Go ahead Polaris and Doo fanatics, rant away. Ride this sled once and you’ll have to alter your bias.

We’ve spent a lot of time this summer trying to figure out why this chassis works so much better than the former Cat Twin Spar.

Stripped down, you can see it uses a similar triangulated design up into its steering head but it becomes glaringly obvious its DNA is closer to Cat’s highly successful Sno Pro race sled.

Although there are many differences between the ProCross and the race sled, what stands out the most is its widely spaced A-arm front end.

The engineers told us the wider stance provides less “leverage” on the upper A-arm when the sled is being plied through bumpy corners and allows the shocks to remain precisely aligned and free from stiction.

Less leverage on the upper A-arms means they can be lighter, transfer less impact into the bulkhead and wide spacing allows the lower ones to absorb the bulk of the energy when bumps are contacted.

Since the extra distance between the upper and lower arms actually lowers the center of gravity and affects camber angles when the suspension is cycling, the ski bottoms remain flatter when cornering, making turn-in sharper and more predictable.

We’d have to agree. Even with its longer-than-the-competion’s 128-inch track, the new ProCross is magic on the trails.