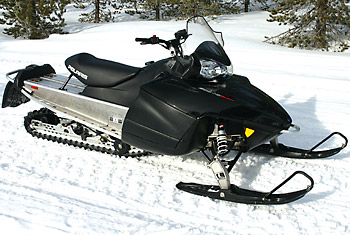 The Polaris 600 Shift has been nailing our BIC Awards for as many years as Polaris has assembled this spartan appearing, yet full featured definition of value.

Here’s what I want to say about this ride (listen up, Kent, if you can focus on something other you’re your quilting classes for a second), there’s a good chance you’re about to learn something.

I hear a lot of crying about snowmobiles being too expensive. Okay, there’s a bunch of whiners out there who balk at the MSRP of anything new, including ultra cheap fan coolers.

Seriously, take a look at any late model used ride with a believable powerplant. Yes, and don’t argue with me: Believable equals 120 hp.

The IQ chassis has built a deserved reputation as “the handler” in the industry. The engine has been at or near the very top of the 600 performance hierarchy since its inception – and that includes the days when it came with carbs!

The new 600 Shifts come with the latest 2-injector version of Cleanfire Injection. This mill is easy on fuel and more stout down Kevlar Lake than ever before. The sled uses steel bodied, gas cell Ryde FX MPV dampers yet the ride quality is all but indiscernible from a full-on IQ 600.

So what’s not to like here? The Shift still doesn’t have back tires or a tach, that’s it! I don’t see the Series II carbed 600 XP giving this ride a fight this year in either performance or outright value.

Stop griping about the price of sleds and check out a Shift 600! You’re not gonna be happy with anything less than 125-ponies anyway, new or used.

Okay, I’m going to do something I have never done before and it’s mostly because I’m a big-hearted and magnanimous person.

I will agree with you that the best value in the business right now is the Shift 600 with either a 121 or a 136-inch track. There’s just too much good in this EFI powered sled to not regard it as the best deal for the best price.

However, I will defend Ski-Doo’s MX-Z Sport. This is a full-featured sled that is a mixture of high-tech, modern chassis design with an old-time powerplant.

There’s no question Ski-Doo uses the Series II Rotax 600 with carbs in this sled to create a price point alternative to customers looking to buy a performance sled in the used sled price range and it’s very good at appealing to this segment.

The company doesn’t flaunt this sled much and it’s probably because it doesn’t want the public to mess up its EPA corporate average fuel economy numbers.

You get a lot for the money with this XP-based stripper sled and it rates as very good value, however, we think the fab-handling IQ Shift with its modern Cleanfire mill is even better.

Yes, I’m agreeing on this choice but, Mark, if you ever read my notes again or check my diary when I’m away again, I’m telling Mom.