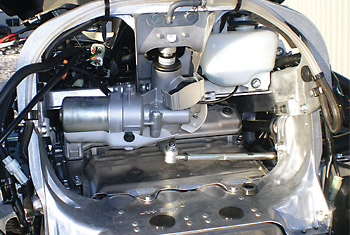 There are two ways of looking at power steering on a snowmobile. Does it take a weak design and make it feel better or is it the greatest new technology for every snowmobile?

If you use the ATV industry as a model, you’d have to say it’s option two. That market is currently flooded with power steering models from nearly every manufacturer and buyers are showing preference for EPS models over conventional ones in big numbers.

Since spending time on the Apex with EPS we’ve asked ourselves many times if the rest of the market will move toward this unique technology in the next couple of years.

We can’t say for sure but we do know there are a number of other snowmobiles currently in the marketplace that would benefit in a huge way from it. Right now Yamaha has a big jump on everyone else and we give the company full kudos for having the guts to present this technology on its flagship snowmobile.

Yamaha has been known for taking giant steps in the past – sometimes with what seems like total abandon. The decision to build an all-4-stroke snowmobile lineup was a huge gamble and has paid off with market share increases.

Attempting to rid the 4-stroke snowmobile of its bloated and heavy image has been tackled with pretty impressive success in sleds like the Phazer and Nytro. Yup, no doubt about it, the move to go with power steering was a bold, courageous move.

This winter, thousands of riders will get a chance to sample this technology and they will serve as the jury. We think the response will be positive and even if EPS is not adopted by the wookies who still think electric start is for wimps, we believe you’ll be seeing it on big-mile cruisers and 2-uppers right across the board within the next two years. Mark, did I just hear the industry do an upshift?

Kent, did you read the title of this BIC category? It sez best “new” concept, not “best concept borrowed from the ATV industry”. C’mon, how can an innovation that adds weight and only masks the real issue, too high CG, really be an award winner.

Sure, I like the new Apex with EPS way better than the old one, and I liked the old one a lot. However, I’m not entirely convinced there’s a real need for EPS on a snowmobile and moreover, I’m not completely convinced EPS is what generated the huge improvement in handling on the new 2011 Apex.

I think it might have to do with the company (finally!) fitting the sled with a set of skis not carved out of shiplap pried from the hulls of sunken Macedonian pirate ships.

Here’s the deal: Ski-Doo continues to push the envelope when it really doesn’t have to. The company owns more 2 and 4-stroke clean engine tech than the rest of the industry combined and then still goes out and pushes on the 60-hp class, building this ridiculously torquey and insanely fuel efficient 4-valve, 4-stroke EFI mill to replace dirty and aging fan cooled 2-stroke technology before its time.

Ski-Doo builds and sells more fan coolers than anyone else and as a result will bring the 600 ACE to the market using huge economies of scale over the next few model years. That’s innovation. Sounds like a winner to me.