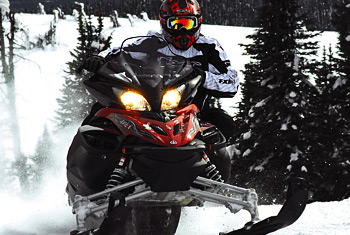 Okay, now the playing field is level! We’re talking exclusively about 4-strokes here and I can line up on the side of the all-new Yamaha Apex with electric power steering (EPS).

This innovation, combined with a set of well-thought-out skis has transformed the nervous handling of this fine mount in a way words cannot fully express. Add in an impressive injection of low-end torque and a nice increase in peak horsepower and you’ve got a 2011 sled that advances the art of snowmobiling in a very tangible way.

EXUP increases efficiency, torque and peak power while netting a gain in fuel economy. We always said Yamaha will forget more about 4-stroke technology than everyone else will likely learn. The move to EXUP proves the point. Yamaha is already on its next generation of 4-stroke whiz-bang trickery while everyone else is staying put.

There’s more that makes the Apex the easy (Kent, I said easy!) choice as best 4-stroke for 2011. EPS has completely rocked the ATV industry. It’s so good it has become, in record time, one of buyers’ most sought after features.

Wouldn’t you know it, without exception, nearly every ATV maker now offers EPS. Look for this technology to spread in our sport in a similar way. Light handling, dart free straight-line stability and easy bar sawing on twisty trails are issues too important for any sled-maker to ignore.

I know, Kent’s going after the Apex’s lofty wet weight – and it is undeniable. However, if Kent could stay on a sled in the twisties for more than two miles he’d realize the Apex with EPS is now a credible handler in spite of its weight.

Wow, Mark, did you win the lottery or something? Hey, any company can build impressive 4-strokes if they’re willing to put the retail price into the same category as the entire Western culture’s national debt. Gimme a break.

A much more sensible choice is Ski-Doo’s 4-TEC. I’ll agree, comparing the two, there is a horsepower difference but not everyone (ahem) has to validate their masculinity with a super-powerful sled.

The 130-hp Ski-Doo 4-stroke is smooth and quick and has proven to be incredibly reliable. The sheer genius of using it in the meringue-light Ski-Doo XR chassis puts it squarely into the wet weight zone of some recent 2-stroke sleds.

I firmly believe Ski-Doo’s strategy of taking the weight out of the entire sled, not just the engine, so the net mass is lower, is the best way to deal with the 4-stroke issues we’ve been writing about for so long.

The XR platform with a 4-stroke engine is flat-out revolutionary and has changed the way performance riders view 4-stroke sleds.