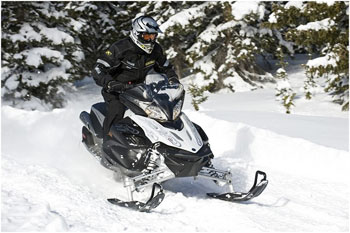 We’ve been rumoring the arrival of EFI for Yamaha’s Vector powerplant for over a year now. Seemed obvious to us: the nicest 4-stroke mill in existence should receive an EFI massage.

Lo and behold, that’s exactly what Yamaha has done for 2010. The pliable 120hp Vector triple had held court in the 4-stroke world since it’s arrival. The engine – with carbs – was up to just about anything the 2-stroke 600cc class could throw at it.

Tons of low-end torque and a belt kissing powerband capable of leveling over 20 mpg had been the order of the day with the Vector, until last season.

While we approved of the move to the Apex rider forward platform in ’08, it came at a cost. The Vector was slowed somewhat by its new clothes and its performance began to pale somewhat amongst its 2-stroke stable mates.

The other issue was fuel economy. Strangely, the Vector’s move to Apex skin hurt mpg a bit. This didn’t make sense to us until we visited Yamaha and rode what 2010 would bring.

The Nytro engine displaces 1049ccs and extrudes power mighty close to the 130hp mark. Bad, bad motor – maybe a little too potent for a refined player like the Vector.

Last year’s 2009 Venture GT uses a variant of the Nytro mill producing about 126hp from the same 1050ccs but ups the Nytro with a mid-range torque bulge that’s positively sweet. You had to know when Yamaha moved the Vector to EFI, its power delivery would be close to the Venture GT engine.

In fact, the company will likely forget more about 4-stroke engines than the competition will know. The Vector benefits from this expertise in a way best described using words like seamless, refined, silken and torquey.

No more Venture weird, wandering idle on cold start and way, way less jerky tip-on at engagement. The new Vector is the sno-mo-equivalent of a gentlemen.

The motor is noticeably more linear in its power delivery at trail speed allowing for better handling and reducing inside ski lift as the rider modulates with greater precision the amount of juice levered from the right thumb.

We were unable to measure fuel economy during our testing of the new EFI Vector but suffice it to say, we’re convinced this new, more powerful but more precisely inducted engine will exceed the current Vector in recorded mpg.

EFI Nytro’s get better fuel mileage than the current carbed Vector so look for something similar to the new Venture GT – and then some.

All-in-all, Yamaha has done an exemplary job with the addition of 100ccs and EFI for Vector. Oh, yeah, we didn’t mention the new 1050 mill is noticeably stronger, did we? It is. In fact, the Vector is right back in the acceleration and top speed hunt.

Supertrax Onlinehttps://www.supertraxmag.com
Check back frequently for new content and follow us on social media!
Previous articleNew York Double for Davis and Thomsen
Next articleSo You Want to Be a Racer Girl?