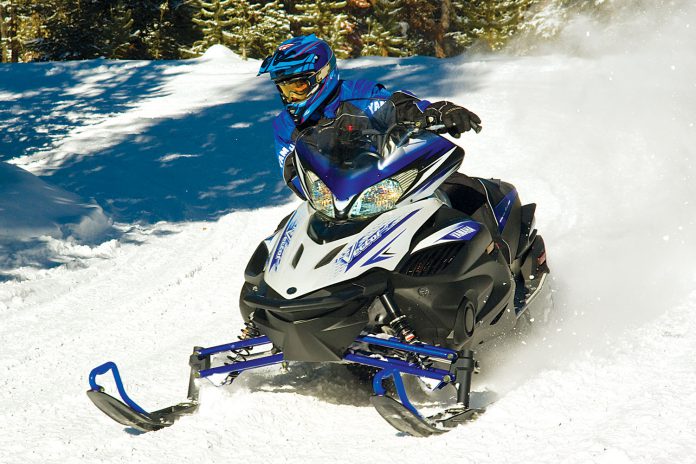 In 2009 the Vector was powered by a carbureted 963cc triple making about 120-hp. Although a bit heavier, Supertrax rated it very high amongst the available 4-stroke sleds from the competition back then – mostly because of that engine.

The Vector’s RS chassis was the same super strong Delta Box as the 4-cylinder Apex but on the trails the Vector was a much more pleasant, lighter feeling sled because of its lighter engine (than the Apex).

Those carbed Vectors were fuel misers (up to 20mpg), generated really nice torque and overall have proven to be super-reliable with very few glitches.

One major complaint over the years has been on-trail darting generated from the skis used on Yamahas. This was particularly noticeable on the 2008 and 2009 RS-based Vectors and is best remedied with a different set of dual carbide aftermarket skis. Find a good one and do this mod and you’ll have an excellent used sled.

This is a nice upgrade and delivered a better-than-average ride. Barring deterioration of the KYB monoshock (they are rebuildable) the adjustability is a nice feature and ups the appeal of this sled.

One problem: It may be hard to locate a used 2008 or 2009 Vector in any condition. Owners hang onto them as second sleds and there weren’t as many built as some competitors.