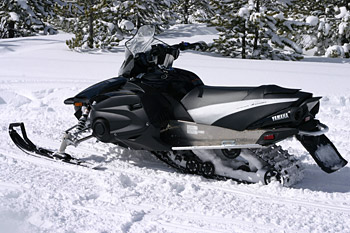 Rode a new Vector (121-inch) the other day and was pretty impressed with the sled’s comfort level.

All things considered, except for Ski-Doo’s rMotion, this monoshock setup has to be the smoothest riding skid in the biz – and this one didn’t even have the Yamaha dial-style tunnel adjuster like the Apex does.

We left the settings absolutely stock and didn’t mess with preload on the big single shock or try to dumb down the damping settings like we do with most of our press sleds.

The trails were frozen up nicely and there was about four inches of groomed powder over hard snow, so conditions were really good for evaluating. However we did hit some fairly long sections of ungroomed trail with four to eight-inch deep whoops in them and the sled rode amazingly well.

Out on the lakes with the throttle taped, the sled handled big junk really well and cushioned the rider’s butt comfortably with no trace of bottoming out.

The 2013 seat foam is really excellent and adds alot to the sleds overall cush feel. Yes, at times the sled did feel hefty and I can’t help but think how good that skid would work in a sled that weighed a hundred pounds less. We may never know.

On the other side of it, the 1049cc triple in the Vector is a sweet engine and remains one of our fave 4-strokes.

It’s fast, smooth and has a fabulous mid-range all while playing a tune that would make Bono smile.

Zero throttle lag but there’s a bit of fetching-up in the driveline when you get out of the throttle and then gas it again.

It’s something you get used to – kind of 4-stroke engine braking effect that Yamaha has actually made a lot better the last couple of years, but it’s still there.

Overall we think this is a sleeper-sled that a lot off shoppers write off as being too heavy to be fun. Too bad. A few hours in the saddle will change even the most critical rider’s mind.