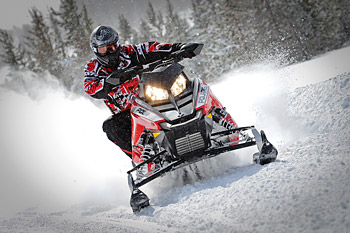 Without question, the sleds that leave showrooms first every year are the big-inch hypersleds either in 121 or 136-plus configurations.

A large number of these snowmobiles are early-ordered and the owners have been salivating to get their hands on them since spring and early summer.

Do these sleds actually outsell high performance trail sleds in the middle of the range, though? These would be 600 2-strokes and 120-130-hp 4-strokes in all track configurations.

Buyers in this mid-performance category tend to hold onto their sleds a bit longer and so the numbers are misleading.

Certainly the big-power people who want engines in the 150-plus range tend to keep hypersleds for a shorter time and move up, sometimes yearly, to the latest, greatest and fastest.

Another consideration is these ultimate power snowmobiles are usually ridden harder and faster and many of the big-sled buyers who own them don’t want to push their luck with reliability.

These are the same people who are putting on significant miles every year, often in far-away places and they just don’t want to be left behind or on the side of the trail with mechanical problems, so they buy a new sled every year.

Another factor is the very strong mountain market. The vast majority of hill country sleds sold are big-inch iron. Altitude riders can use all the power that’s available and usually won’t settle for less – especially if the price is close anyway.

We’ve always maintained a good indicator of the market is to check out what is being sold used, not new.

It appears the popularity of 110-130 horsepower sleds is very high and it’s where not just a lot of new-sled riders are looking, but those who are making a stab at entering the market, too.

We think it bodes well for companies building sleds in this range to offer models with less technology and lower prices to keep new people coming in.