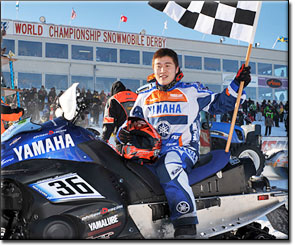 It was an epic weekend for the new Yamaha FX Nytro, as Minocqua Yamaha’s Japanese Snocross champ Yuji Nakazawa thumped his way into the winner’s circle of the 45th Eagle River Snowmobile World Championships.

Development on the Yamaha four-stroke sno-cross race sleds continues at a feverish pitch and this weekend showed more proof of the four-stoke power potential.

Minocqua Yamaha’s Race Team Manager Masa Saito was very happy with the results of their hard work and Yuji’s great riding. “Yuji was very confident, and it showed in his riding. He did a very good job out on the track today,” he says. The two-stroke competition didn’t feel quite the same way, as Saito describes. “There were many spectators, and they were very happy for us. Before this the other brands were congratulating us for being there you know, but after the Yamaha four-stroke won…well they aren’t so complimentary anymore! (Laughs) This was a great starting point for our team!”

With Tim Hasegawa, retired CEO of Yamaha Motor Co. in Japan and 1970s Yamaha snowmobile engineer Oly Hayata cheering him on, Nakazawa not only finished 1-3 in his qualifiers but holeshot the field and led the final moto wire to wire. A stunning victory for Yamaha and the FX Nytro!

“The race track conditions were hard-packed and the Yamaha four-stroke power delivered the needed torque and gave us the holeshot,” Saito proudly states. Nakazawa was very pleased with both his machine and his own performance, saying “The FX Nytro engine was strong and the suspension handled the track conditions very well! I was motivated by the challenge and by all the Yamaha people watching. Also the course was very fun, so I rode as hard as I could and am very happy I could take the win.”

The Yamaha Factory Snocross team over in Montana was also thrilled at the news, which gave them encouragement for the West Yellowstone National final that had been snowed out on Sunday and rescheduled to be completed on Monday. With strong runs in his qualifier races, Steve Taylor was confident going into the main event.

“I had a third, a second, and a fifth which put me right to the front row in the main, so qualifying went pretty good!” he tells. “I holeshot one qualifier yesterday, and was top three on the start in the rest of the Qualifiers. We’ve got the suspension working much better this week too, so everything was great.” The team had been busy testing during the week and was well prepared for the race. “We spent quite a lot of time this week getting the sleds dialed in and our practice time on the track really helped,” says Cory Davis. That effort paid off for Davis in his Qualifiers too. He describes “I went 5-6-4 and that was enough to make it to the LCQ. There I got the holeshot and led the first lap. We had to get top five and I let a couple guys get around me and just settled back and cruised in third to get to the main.”

In the main event Taylor charged his way to a well deserved fourth place in Pro Open, while Davis overcame some vision problems with snow dust to finish a credible 13th in Semi-Pro Open.

Davis is now looking forward to next weekend. “I’m really pumped about the X games. I’ve gone from not being sure if I’d be racing at “X” to being in Speed and Style event for sure and an alternate for sno-cross, so I’m excited about that.”

Taylor is also looking forward to next weekend. “We needed this confidence boost,” says Taylor. “We are taking off for the X games and should be there tomorrow afternoon. We practice Wednesday and Thursday. I’m very confident going into the X games and we have been doing a lot of practice on that style of track. Our motor is so strong and the machines are handling well that I know we’ll accomplish something!”