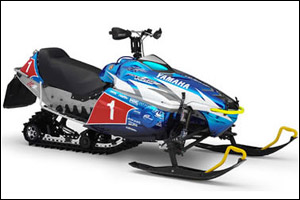 Yamaha Motor Co., Ltd. announces its team program for competing in the 2006 MFJ All-Japan Snowmobile Championship series. As with last season, Yamaha will compete in the pinnacle “Super Class” of the 2006 series using machines powered by 4-stroke engines.

Snowmobile racing is a type of winter motor sports that is very popular especially in North America and other markets. Yamaha is the only domestic maker of complete-built-up snowmobiles and an active participant in the All-Japan championship series with the aim of promoting the development of snowmobile racing in Japan.

What’s more, with the cooperation of our owner support organization “Club YAMAHA MOTORCYCLE,” a new program was begun in 2005 that entered Yamaha 4-stroke machines in the “Super Class” which until then had been strictly the domain of 2-stroke machines.

Last season, our “Club YAMAHA RACING” worked aggressively with the primary aims of (1) taking on the challenge of developing and proving the potential of 4-stroke machines, (2) becoming a team that is a platform for riders seeking to reach the top level in the sport, and at the same time to work at the race venues to (3) conduct service programs aimed at increasing the number of race fans.

The above-mentioned concepts and aims will be continued during the 2006 season establishing a new “Yamaha Racing Team” aimed at (4) becoming a team that can reach the pinnacle of snowmobile racing in Japan with 4-stroke machines.

From this team, Yuji Nakazawa and Shinji Tozawa will compete on the “RSVector SP.” Meanwhile, “Club YAMAHA RACING” will enter Kiyotaka Kawagoe, Sho Inaba, Masafumi Terasaki and Nobuaki Eikura as four representative Yamaha user riders with the aim once again of promoting the sport of snowmobile racing.

Supertrax Onlinehttps://www.supertraxmag.com
Check back frequently for new content and follow us on social media!
Previous articleSmaller Bore In Sno-X
Next articleA Racing Legend Moves On