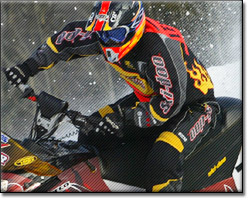 The new 2006 ISR rules limit Open class engines to a maximum of 600ccs for Mod snocross which foreshadows the future in the stock class as well.

A possibility for next season is Snocross racing will consist of two classes: Stock and Modified. The Stock class will use a 600cc (minimum 500 build) carbureted, single pipe engine based entirely on a production 600cc motor in each OEM’s line-up.

There’s an upside to this deal with snowmobile manufacturers now able to ditch expensive, finicky 440 engines which have no basis in the real world thus eliminating huge costs to maintain technology not applicable to production snowmobiles.

It’s hoped the 600 Stock Class will include a rule banning racing fuels as these engines will produce about 118 to 120 HP out of the box. That’s about 10 more ponies than current 440s running racing fuel. With the broader power afforded by a bigger displacement mill, traction, clutching and long term reliability will be improved for competitors.

With the Open Class moving to 600cc’s this season, HP may drop from 160-170 ponies in current 800 Mods to about 135-145 HP in a hot rodded 600. This will not affect the quality of the Mod Classes in any way as the biggest limiting factor in sno-x racing is traction. Every time the lug depth of tracks increases, the sleds go faster.

Open sleds have been producing about 165 HP for the past four seasons. The problem is there just isn’t enough traction available for motors this powerful. The move to lighter, slightly less powerful engines with the same lug tracks will actually improve head-to-head competition.