WHO NEEDS SNOW WHEN YOU’VE GOT AIR? 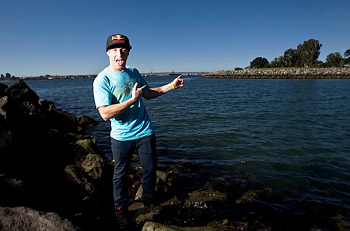 LaVallee to Attempt Record-Breaking Snowmobile Distance Jump On New Year’s Eve, Live From The Port of San Diego on ESPN

While our friends to the north call them snowmachines, most of us know them as snowmobiles, and the hipper folks simply call them sleds. No matter what you call this mode of transportation, history will be made by Levi LaVallee on New Year’s Eve at Red Bull: New Year. No Limits., airing live on Friday, December 31 on ESPN, immediately following the Chick-Fil-A Bowl (approximately 11:00 p.m. ET / 8:00 p.m. PT).

LaVallee, a seven-time Winter X Games medalist and champion snocross racer, will attempt to jump his Polaris snowmobile longer than ever before and eclipse the current record of 301 feet. In addition to his racing exploits, Levi is widely-known for becoming the first person to double backflip a snowmobile in 2009.

The event will take place at the Embarcadero Marina Park in the Port of San Diego. Embarcadero is Spanish for “landing place,” making it an appropriate location for LaVallee’s jump. On-site viewing will be free to spectators at Marina Park. Gates will open at 6:00 p.m. PT.

“I can’t even explain how excited I am to be part of this year’s Red Bull: New Year. No Limits.,” said LaVallee. “With the jump gap itself being longer than the existing distance record, it is going to be one heck of a ride!”

“For the fourth year we have the opportunity to showcase an extraordinary athletic feat. This year’s jump by world champion snowmobiler Levi LaVallee will continue in that tradition,” said Joan Lynch Owens, vice president and executive producer, ESPN content development. “This is the kind of anticipation television our fans expect to see on ESPN.”

NO SNOW? NO PROBLEM!

San Diego may not be the first place one thinks of when discussing snowmobiles, but the lack of snow won’t hinder the 28-year-old native of Longville, Minnesota (population 180), the Turtle Race Capitol of the World and home to weekly meat raffles.

Yes, turtles and meat – but not turtle meat. LaVallee will use artificial turf on his 1,100-foot run-up path, which will provide the necessary grip for his snowmobile’s track to ensure maximum speed as he hits the take-off ramp. LaVallee’s jump will take him over a 300-foot water gap at the entrance of the Marina. A small amount of snow will be sprayed on the landing ramp to provide necessary slickness so Levi can make a smooth landing.

“It will be awesome for people to see a snowmobile making a world record distance jump in San Diego,” said LaVallee. “Snowmobiles are made for snow, and last I checked there isn’t much snow in San Diego, but it is a great location for this event. Only at Red Bull: New Year. No Limits. would you see something like this.”

Leading up to his big night, LaVallee will work with athlete performance experts, physicists and engineers, in addition to his core team, in an effort to get the most out of his body and 450-pound snowmobile. Valuable information will also be attained and put into future snowmobile development.

LaVallee has had a very successful career in several snowmobile disciplines. A snocross racer for more than 15 years, he took up freestyle in 2007, and at Winter X Games 12 in 2008, he won the gold medal in the Freestyle and Speed & Style events and was named Athlete of the Games. In 2009, he won the Pro Stock Snocross championship and came thisclose to landing the first-ever snowmobile double backflip at Winter X 13, falling off on the hard impact but garnering global media attention. Earlier this year, at Winter X 14, he took gold in the newly-created Snowmobile Knock Out event.

LaVallee becomes the fourth athlete to star in Red Bull’s annual New Year’s Eve celebration on ESPN, which highlights extraordinary athletes pushing their physical, mental and technical limits to break boundaries and records. Robbie Maddison kicked things off in 2007 by jumping his motorcycle 322 feet over a football field in Las Vegas and followed it up in 2008 by jumping onto – and off – of the 96-foot-tall Arc De Triomphe at Paris Las Vegas. Also in 2008, Rhys Millen backflipped an off-road truck and just missed sticking the landing. Last year, Travis Pastrana jumped his rally car a staggering 269 feet over water, landing on a barge in Long Beach’s Rainbow Harbor.

For high-res images of LaVallee, free for editorial use, visit www.redbullphotofiles.com.