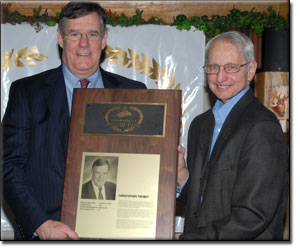 Arctic Cat President and Chief Executive Officer Chris Twomey was inducted into the Snowmobile Hall of Fame in St. Germain, Wis. Twomey, of Thief River Falls, Minn., was one of four individuals to receive the industry honor for 2008.

In his acceptance speech at the induction ceremony, Twomey thanked the Snowmobile Hall of Fame for the honor, but insisted that Arctic Cat’s success and strength was the result of its passionate, dedicated employees.

“I accept this award on behalf of the 1,500 employees of Arctic Cat,” said Twomey. “I’ve been incredibly fortunate to work alongside this very talented group of people, and it is their creativity and strong work ethic that have propelled Arctic Cat to industry leadership.”

The Snowmobile Hall of Fame cited Twomey’s strong strategic approach to the snowmobile business, a belief in progressive product development and leadership in the sport’s political hurdles such as snowmobile use in Yellowstone National Park as key reasons for Arctic Cat’s success and his induction.

More than 300 people attended the induction ceremony, including a group of Arctic Cat employees who in four days rode 2008 model year Arctic Cat snowmobiles 1,075-miles round-trip from Thief River Falls to St. Germain and back.

Twomey joins other Arctic Cat employees who have been inducted in the Snowmobile Hall of Fame, including Larry Coltom, Kirk Hibbert, Roger Skime, Dave Thompson and Ole Tweet.