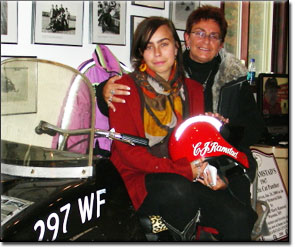 The Waconia 2008 Committee is especially proud to announce that $5,000 was raised at this year’s traditional Waconia trail ride.

This year’s ride around the lake was named the “C.J. Ramstad Memorial Trail Ride” and a record 491 classic sleds participated. Both Karla and daughter Marly Ramstad lead the ride on CJ’s old black Panther!

The total of $5,000 in donations will be presented to the Snowmobile Hall of Fame and Museum in St. Germain, WI, where they are constructing a Ramstad Library and Media Center a special room/display of C.J’s photographs and historic artifacts.

The presentation will be made at the Museum’s annual 2008 Annual Classic Sled Roundup on May 25, 2008. CJ’s beloved 1967 Panther is now placed on permanent display at the St. Germain museum.

Thanks to all participants at Waconia 2008 that donated at the trail ride, live auction, and when CJ’s helmet was passed around. We appreciate the overwhelming generosity shown by the classic sled-heads in attendance.