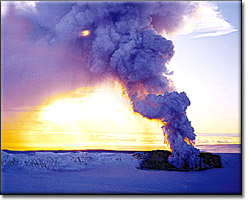 On August 6th of this year, our own CJ Ramstad rode a test project Polaris Fusion across the ice fields of Iceland’s Vatnajokull glacier to a spot on the snow-covered surface called Grimsvotn where glacier scientists had constructed two large huts for use by glacier and volcano researchers.

CJ says there was no doubt something was going on under the ice at Grimsvotn when he was there as steam was coming off nearby bare patches and the two buildings were heated by ample steam vents rising up underneath.

Just about three months later to the day, on November 2nd, the slumbering giant under the ice decided to blow and the place known as Grimsvotn disappeared, becoming a huge volcanic caldera similar to an eruption in the same area in 1996.

The resulting plume of smoke and ash was easily seen from space on the EROS satellite network and gasses and dust were detected as far away as Norway.

“Volcanoes are like that,” CJ says with a shudder, “one minute you’re laughing about monsters under the ice, next minute – if you happen to have the bad luck to be there – you’re blown away in an explosion of lava and ash.” What if it had happened when the riders were there? Maybe next time, CJ says.