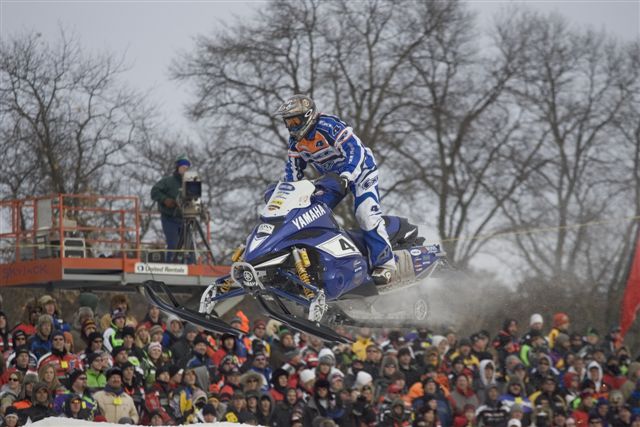 Boss Racing’s Robbie Malinoski drove a prototype Yamaha snowmobile to the world’s first four-stroke National Snocross victory in round three of the 2007 WPSA PowerSports Snowmobile Tour at Brainerd, Minn. on Sunday, Jan. 14. Just as Doug Henry gave Yamaha its first four-stroke motocross victory aboard the YZM400F OWH2 prototype in 1997, Malinoski’s historic performance on a special Yamaha-developed racer – dubbed the FX Nytro – proves Yamaha’s four-stroke technology can go ski-to-ski with any two-stroke out there.

The Pro Open race couldn’t have been any better scripted for Malinoski. Despite subfreezing temperatures he qualified well and then grabbed a holeshot to lead all 20 laps of the technical jump-filled course, using the huge torque of the Nytro-based three-cylinder engine and the agile handling of the FX Phazer-inspired chassis to dominate the event. “The engine has so much power and the chassis is built perfectly around it,” Malinoski said afterwards. “It’s amazing how the track gets that massive torque and horsepower to the ground.”

“Boss Racing and Robbie took on the four-stroke challenge and they’ve done an outstanding job with this victory,” added Greg Marier, Yamaha’s Snowmobile Racing Manager. “Our goal was to take on the best in the world at the biggest snocross events, and the WPSA is the biggest and best there is.” Next stop for Malinoski and the FX Nytro is the Winter X Games, scheduled for Jan. 24 in Aspen, Colo.

Supertrax Onlinehttps://www.supertraxmag.com
Check back frequently for new content and follow us on social media!
Previous articleYamaha Genuine Parts and Accessories
Next articlePolaris Pumped for Winter X