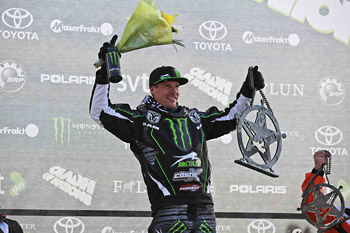 It’s been a season of snocross domination for Team Arctic’s Tucker Hibbert. After winning his sixth-consecutive X Games gold medal and then clinching the 2013 ISOC Pro Open National Championship, Tucker Hibbert solidified the season with a victory at Sweden’s Clash of Nations Super Snowcross event.

With 16 riders in the main event, including Logan Christian from Christian Bros. Racing, Hibbert ripped a monstrous holeshot and ran away with the win, while Logan Christian charged hard through the entire race finishing with a strong 3rd place podium.

Hibbert said, “It was awesome to come back to Sweden, take a win and finish the season healthy. It’s a great feeling flying across the world and having fans cheer for you. I’m always surprised by the amount of support and excitement from fans in Scandinavia.”

In the Pro Stock class, 16 year old Martin Moland from Norway had an outstanding win. Moland’s Clash of Nations win came shortly after he was crowned the 2013 bronze-medalist in the Norwegian snocross championship.

Luva Racing’s Alexander Berglund of Sweden rounded out the podium for Arctic Cat with a solid 3rd place finish.

Team Arctic Race Manager, Mike Kloety said, “Team Arctic has had a very successful 2013 snocross season and these wins and podium finishes at Clash of Nations make it an even better one! It’s truly fantastic to see the highest level of enthusiasm these snowmobile race fans have for Team Arctic.”

About Arctic Cat – Arctic Cat Inc., based in Thief River Falls, Minn., designs, engineers, manufactures and markets all-terrain vehicles (ATVs) and snowmobiles under the Arctic Cat brand name, as well as related parts, garments and accessories. Its common stock is traded on the NASDAQ National Market under the ticker symbol ACAT.

More information about Arctic Cat and its products is available on the Internet at www.arcticcat.com.