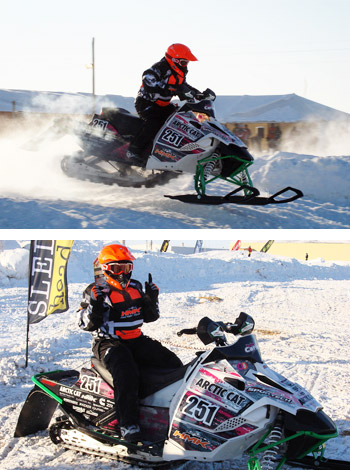 Andrew Battles Through Poor Starts to Qualify for Two of Three Finals and Captures 6th in Semi-Pro Open; Chris Carlson Wins Plus 40 Class

Team Sportech was back in competition this past weekend in ISOC Minnesota Regional action in Fertile, Minnesota.

A winter storm, which rolled in Saturday, brought snow and limited visibility but didn’t hamper the efforts of Team Sportech on the track as the family of racers qualified for five of six finals and scored two podiums.

Taylor Carlson once again proved she is an up and coming force in the Pro-Women ranks, as she competed with National Pro riders and came away with second place honors.

A strong round of qualifying including one heat race win earned her the number two position in the final behind the always fast and national level competitor Carly Davis.

When the green dropped, Taylor pulled a monster holeshot aboard her HMK, FOX Racing Shox Arctic Cat, and rode a strong and consistent race. Taylor was rewarded with a second place finish at the line behind Davis.

“Every weekend I’m improving and most importantly gaining confidence,” said Taylor after the final. “I was nervous before the season started about making the jump to the pro ranks, but I’ve proved I can run with the best in the nation and I know a top place finish is within reach this season.”

Taylor’s teammate, Andrew displayed his mental toughness as he overcame some poor starts in the Semi-Pro field, but still made the finals in two of three classes.

Andrew’s strongest showing of the weekend came in the ultra competitive Semi-Pro Open division where the young Carlson charged from the back row and passed half the field to earn a hard fought 6th place finish.

“I struggled off the line this weekend,” Andrew said. “We’ve got the equipment and support to perform, it’s now up to me to improve my starts. I know what I’ll be working on all week before we head to Canterbury for the ISOC Nationals. I’m determined to be first into turn one next weekend.”

For team manager Chris Carlson, the weekend was once again a busy one, as he manages the racing efforts of Andrew and Taylor and still finds time to compete in the Plus 40 and Plus 30 classes. Chris took the top spot in the Plus 40 division and a second place overall in the Plus 30 behind Karl Christian.

Team Sportech will compete next on the ISOC National stage in Shakopee, Minnesota during the Air Force National, January 9-11.