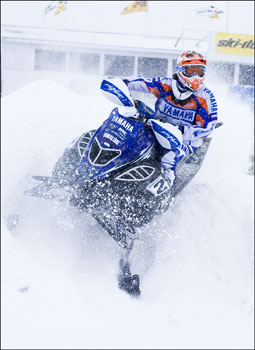 It was a super weekend for Yamaha Factory Racing at the 27th Edition of the Grand Prix de Valcourt, Round 6 of the AMSOIL® Championship Snocross Tour, held in Valcourt, Quebec.

The relatively mild weather, sunny skies and ideal snow conditions made for picture perfect racing on the storied Valcourt track, the only Canadian venue to be included on the ISOC Nationals schedule this winter.

With guest drivers from the SCM, CSRA and Rock Maple circuits showing up for the event, three qualifying and two LCQ heats had to be run to determine who would claim one of the 15 spots on the starting grid for the final.

Taylor, who got off to a back-of-the-pack start in his heat race, battled his way into a fifth place finish, just missing a front row berth for the final. He recovered nicely with a third place finish in the LCQ, however, which guaranteed him a back row start for the main event of the day.

Meanwhile, former CSRA National Champion Hayden sped out of the gate to take the holeshot in his qualifier and lead most of the race. He eventually finished third, which put him on the front row for the final.

Both Taylor and Hayden rocketed from the start line in the final to find themselves in the thick of things as the field headed into the first corner. Unfortunately Taylor, who was running in fifth behind Hayden, got punted by another sled sending Taylor over the berm. He kept excellent control of his FX Nytro®, however, and reentered the track in 14th place.

Although it was very difficult to pass on the long and extremely fast Valcourt track, Taylor showed his skill and determination by moving up to eighth place by the end of the Pro Open final.

“The sled setup was just awesome this weekend,” said Taylor. “I had wickedly fast lap times in practice, which I carried through into the qualifiers and final. If it hadn’t been for that first corner chaos, I’m sure a higher finish would have been possible.”

Hayden, who has been nursing an injured shoulder since the beginning of the season, ran in sixth place on the 15th lap of the 20-lap race. Handicapped by his tender shoulder, he started fading in the closing laps and found himself settling for 11th at the checkered flag.

“This was definitely one of my better weekends. My 4-stroke sled rocketed off the line and we achieved what I would say has been the best suspension setup yet on the FX Nytro®. Everybody’s dedication and hard work is starting to pay off,” said Hayden. “It’s inevitable that by the end of the day my shoulder is going to give me trouble and that’s been my problem every time out, but I want to finish the season before I go for surgery.”