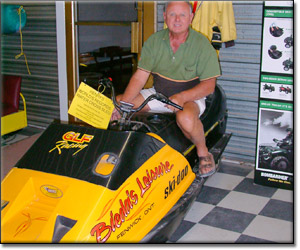 Fenwick, Ontario Snowmobile Daredevil Henry Bieda is challenging the claim by Greg Nielson of Grand Prairie, Alberta that he set a world record by driving his snowmobile 98.6 kilometres over a body of water. The claim by Nielson appeared in the August 22nd edition of the Globe and Mail.

As many in the Niagara Region are aware, Henry Bieda’s exploits on the snowmobile have never been duplicated, and he remains the undisputed king of snowmobiling over open water.

On June 11, 1989, as part of Welland’s Rose Festival, and in front of several hundred of onlookers, Henry Bieda travelled in a circular route for 100.1 miles (162km), establishing a world record for snowmobiling on water that, despite claims by Greg Nielson, still stand to this day. Bieda has the witnesses, the videotape, and the media clippings from that day, to back up his rightful claim to the title.

Still, Bieda’s distance record pales in comparison to the feat he accomplished on a balmy Sundry afternoon in August, 1988, when Bieda traversed Lake Ontario from Port Dalhousie to Toronto Island.

It’s a feat that has never been duplicated, nor ever attempted, again. Bieda managed to traverse 32 miles across the Great Lake in 42 minutes, and was escorted by an OPP Patrol boat for the first 20 kilometres of the journey. The feat received considerable attention at the time from local media, and Henry Bieda was crowned “Pelham’s Own Daredevil”.

Bieda, who co-owns Bieda Powersports with his son Stephen in Fenwick, Ontario, remains fiercely proud of his accomplishments. “We spent years developing a snowmobile that would be light enough to travel across large bodies of water, while ensuring the machine was still able to achieve the speeds required to keep it from sinking” remarked Bieda.

The Bieda dealership showroom still displays the photos from both the Lake Ontario and Welland Canal feats, and it takes little prompting for Bieda to pull out the old videotapes for inquiring customers.