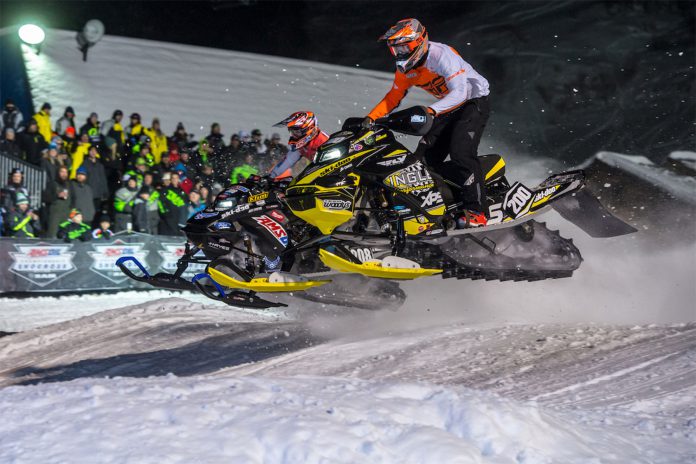 The Ski-Doo X-Team snocross racers have started the season with a stranglehold on the podium and dominant performances on the track. Lincoln Lemieux (Scheuring Speed Sports) and Elias Ishoel (BOSS Racing) claimed wins in Rounds 3 & 4 of the top Pro class over the weekend, and each time they were backed up by Adam Renheim and Tim Tremblay (both from Warnert Racing) to sweep the podium. Adding to the dominance was the Pro Lite podium sweep by Patenaude brothers Leo (Ingles Performance), Hunter (Scheuring Speed Sports) and Francis Pelletier (Warnert Racing) on Friday. Of the Pro podium positions through four rounds of racing, Ski-Doo racers have taken an amazing 11 of 12 and all four wins.

Pro Domination
The new Ski-Doo MXZx 600 RS E-TEC race sled has proven to be fast, durable and easy to handle as shown by both run away wins and tough rides through the pack. Friday Lemieux started the final with a strong holeshot and after the first lap established a lead that wouldn’t be challenged, but the Warnert duo of Renheim and Tremblay had to work their way through traffic from mid pack starts to earn their podium spots – and they were followed across the line by BOSS teammates Ishoel and Aki Pihlaja to make it a top five sweep! Saturday’s race had a very familiar feel as Ishoel and Pihlaja shot out ahead of the pack with Lemieux close behind in fifth while Renheim and Tremblay were mid pack. Ishoel staked claim to the top spot and slowly began building a lead that went unchallenged, while Lemieux and Pihlaja both had challenges as Lemieux came off in front of Pihlaja and he couldn’t avoid hitting the sled virtually ending Aki’s night while Lemieux was able to remount and finish eighth. Renheim and Tremblay were in full attack mode as they came through the pack yet again and with a couple laps left cemented their podium positions and the Ski-Doo sweep. Elias Ishoel’s fast qualifying and stellar final results helped him increase his championship points lead as the series breaks for the holidays.

Pro Lite
Pro Lite racing on Friday added a sibling rivalry as brothers Leo and Hunter Patenaude battled it out for the win. Leo was able to pull a slight advantage at the end and by backing up his Duluth wire to wire win, shown he’s the real deal. Francis Pelletier had the red plate coming into the Jackson Hole event and by virtue of his strong and steady third place finishes both nights will leave with it as he retains the championship points lead.

Brodeur and a blast from the past
Ski-Doo Women’s Pro-Am racer Megan Brodeur claimed her third straight win on Friday and proved she’s still the one to beat. While Saturday was a little tougher because of a first lap tangle, she showed the drive that’s necessary to be a champion and worked her way back to a close second place finish. She also will retain the red plate and championship points lead.

In a blast from the past, former Pro Champion Steve Martin – with huge help from Anderson Racing – came to Jackson Hole and raced in the Pro-Am +30 class where he managed a second place finish! Congrats as it’s great to see some guys reacting to Kurt Bauerly’s challenge to come out and have some fun, and certainly great to see Martin hit the podium.