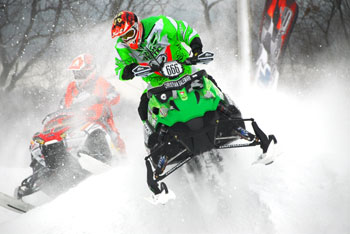 Swedish snocross star Christian Salemark will continue his onslaught of the ISOC National Tour in 2009, joining the Arctic Cat-sponsored team Christian Bros. Racing for the second half of the season.

The move unites a super talent with a super team, creating a formidable force for the remaining five Nationals and select Regional races.

In just his second season of North American competition, 19-year-old Salemark (of Vendeln, Sweden) has already proven himself a top Semi Pro by winning the Open class final in Ironwood, Mich., as well as winning two Pro class finals in Regional competition. He currently leads the point standings in the ISOC Semi Pro Open class.

His stellar results came despite competing as a privateer out of a rented truck and trailer, following the abrupt demise of a team that had hired him for the full season.

Short of the logistical support needed to contest the National circuit, but bursting with talent and desire, Salemark wasn’t sure if he’d be able to complete the full season of racing.

Unfortunately, Logan was sidelined following an injury at Canterbury National and wouldn’t be back to full-speed until later this season.

That opened a door for Salemark, who will be joined by his father/mechanic Jorgen to race out of the Christian Bros. Racing semi-trailer for the remainder of the season.

“We saw the tough situation that Christian has endured this season, and yet he was still winning races,” said Dwight Christian of Christian Bros. Racing. “He’s a tremendous talent. When Logan got hurt at Canterbury, it created an opportunity to bring him onto our team.

“Our entire team discussed the situation and everyone, including Logan, believed that adding Salemark was a positive step. It will help Salemark and it will help us in our chase to win the ISOC Team Challenge.”

The next race for Team Arctic and Christian Bros. Racing is Feb. 6-8, in Brainerd, Minn.

About Arctic Cat – Arctic Cat Inc., based in Thief River Falls, Minn., designs, engineers, manufactures and markets all-terrain vehicles (ATVs) and snowmobiles under the Arctic Cat® brand name, as well as related parts, garments and accessories. Its common stock is traded on the NASDAQ National Market under the ticker symbol “ACAT.” More information about Arctic Cat and its products is available on the Internet at www.arcticcat.com