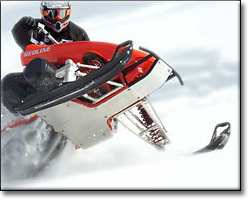 We received a call to our offices in April inviting us to Old Forge, New York for a ride on an honest-to-goodness Redline Revolt. Unfortunately, we were six hours from their location and temperatures were hovering near 55F.

By the time we made the trip, the snow would have disappeared. In any case, we suggested a more northern locale for a ride and were told it would happen. It didn’t.

As spring turned into summer a Press Release came from Redline indicating they were pursuing another $2 million (US) in financing to shore up plans to produce the snowmobiles dealers have ordered.

The latest we’ve seen on the sled confirmed some of our earlier assertions about Redline’s technology.

The wild T-15 rear skid used in all the protos we’ve seen so far has given way to a much more conventional two shock, parallel rear arm set-up.