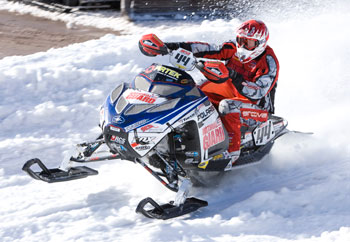 There was a fire brewing Sunday afternoon as the Pro Open final field came to the line for the showcase race of the Arctic Cat Eastern Nationals at the Finger Lakes Gaming and Racetrack facility.

But there was no smoke, just a burning desire for redemption by TJ Gulla (Polaris) from a self-inflicted mistake the evening prior in the Pro Super Stock final that cost him the win.

Coming to the line as the third best qualifier of the day, behind teammates Levi LaVallee (Polaris) and top qualifier Brett Bender (Polaris), TJ squared up for the green near the inside adjacent to his National Guard teammates for the 18-lap final.

Penned as the favorite by many in attendance, his opportunity to cover was postponed briefly as a red flag on the opening lap due to a violent get-off by Yamaha pro rider Steve Taylor, forced ISOC officials to restart the final grid. Taylor was shaken but managed to walk off the track yet was unable to continue.

Despite the added nerves of anticipation, Gulla remained focused and drilled the holeshot, leading a swarm of Open sleds down the front stretch. It was a position he would not relinquish, pulling out to a comfortable 5-second lead over the second place sled of Ryan Simons (Arctic Cat). Following them was Levi LaVallee in third and Brett Turcotte (Arctic Cat) in the fourth slot.

Turning sub 28-second lap times, Gulla was clearly the fastest sled on the track, and pulled to a comfortable lead over his pursuers. That put the focus on the battle for the remaining podium positions.

With lap traffic coming into play, LaVallee on more than one occasion displayed ski-tips to Simons but was unable to overtake the Alberta talent, as Simons made his Arctic Cat buggy as wide as possible, keeping Levi at bay.

The order remained unchanged as they crossed the finish line for the final time, with a noticeably excited Gulla, as he fist pumped the air in front of what could be considered his hometown fans. “I had something to prove today,” said Gulla after the race. “Last night was my fault… I wanted to win today and win by a lot.”

Simons was equally happy with his results, specifically holding off the multiple attempts of LaVallee to make a pass. “I lost my brakes at the end of the race,” said Simons. “I had to do everything I could to block off Levi and keep him behind me.”

With the final of Semi-Pro Open postponed from Saturday evening, Sunday marked a day of non-stop racing for many Semi-Pro riders and Cory Davis (Arctic Cat) made the best of it, with a pair of dominating wins.

His first victory may have been the most impressive as he charged virtually from last to first in a single lap. Starting from the back row of the 16-sled field, Davis combined a race savvy start and a turn one tangle to catapult his Arctic Cat to the front of the field. “I was hoping if I started on the inside (of the back row) the leaders would push wide and they did,” said Davis from atop the podium. “That put me in position to take advantage of the first turn crash and allowed me to get to the front.”

Aside from the first lap spectacle of Davis, Tim Tremblay (Ski-doo) perhaps demonstrated even more moxie as he battled back from an early race “get-off” that shuffled him to tenth, yet charged back through the pack to finish second.

In Semi-Pro Super Stock, it was Tremblay who pulled the holeshot, with Davis in tow. But the speed of Davis proved too much for the Ski-doo racer from Quebec, as Davis shot past Tremblay on just the third lap of the 14-lap final. Behind them it was Derek Ellis (Polaris) from Clayton, Idaho completing the podium.

The hottest female rider in the regional Rock Maple Racing circuit, Michelle Lemieux (Ski-doo), proved her talents Sunday afternoon with a win in Pro Am Women Super Stock. But it didn’t’ come without a challenge, as LaDore, Quebec racer Jennifer Pare (Polaris) pressured Lemieux for several laps but failed to yield to a cautionary yellow and was disqualified on the white flag lap.

Supertrax Onlinehttps://www.supertraxmag.com
Check back frequently for new content and follow us on social media!
Previous articleSANPETE COUNTY, UTAH: Mountains Are Not Flat
Next article2010 Yamaha Vector: The Right Thing