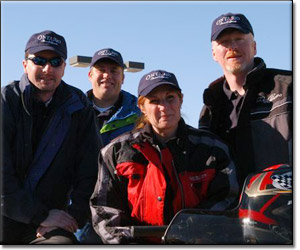 Last winter Supertrax partnered with the Province of Ontario in a special “Win the Ride” contest. The Grand Prize was an all-expense paid trip where the winners rode with the crazies who produce the sport’s number one circulated, most read snowmobile enthusiast publication in North America.

From an entry standpoint the contest was an overwhelming success with entries surpassing all previous snowmobile contests promoted by OTMPC (Ontario Tourism Marketing Partnership).

We were joined on the adventure by none other than the Snowtrax Television Crew of John Massingberd, Jeff Steenbakers and Dan Bailey for the event.

From OTMPC and associated Tourism Districts throughout the Province we enjoyed the company of Chris Hughes, Claude Aumont, Jennifer Rowe, Len Gillis and from Kirkland Lake, Mayor Bill Enouy and City Manager Don Studholme. Among the winners were two hardcore snowmobile enthusiasts and two casual riders.

The entire deal came off without a hitch while these lucky winners rode our sleds, ate free and had a blast with some of the nicest people we know – us.

Part of our visit to Kirkland Lake included a special private, after-hours visit to the brand new Hockey Heritage North. This multi-million dollar facility is a special treat for hockey enthusiasts and, in particular, those with a sense of Northern Ontario hockey history.

You can ride right to the door of Hockey Heritage North and enjoy a great afternoon or evening of entertainment within minutes of great accommodation and restaurants, all on-trail.