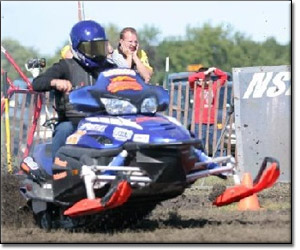 The wins kept right on rolling in for 2007 Yamaha snowmobiles in summer grass-drag racing competition on Sept. 23-24 in Grayslake, Ill.

Under rainy conditions on Saturday, Fix topped an all-Yamaha Stock 500 podium on his Fix Racing 2007 Nytro, narrowly beating out Miller on a Vector and Hauck on another ’07 Nytro.

Veteran Hauck then turned the tables in Stock 600, bringing his Hauck Racing Apex home in first and relegating Fix to second on his 2007 Apex RTX. Hauck then repeated the process by taking the Improved Stock 600 win on his RX-1 over Fix on a Warrior.

In the Semi Pro class, Miller grabbed wins in Stock 500 aboard his Lustilla Racing Vector and in Stock 600 on his 2007 Apex, earning the NSRA’s Semi Pro Driver of the Day award in the process.

Amazingly, Sunday’s results were a virtual carbon copy, making a total of 10 Pro and Semi Pro victories for Yamaha during the weekend. But the wins did not come easily. “The course was muddy today and yesterday due to all the rain,” reported Fix afterwards. “Traction was critical – you just had to find the best line to get down the track.”