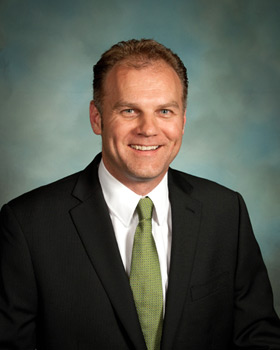 In this role, Brad will be responsible for leading and growing Arctic Cat’s snowmobile business, building and executing a global strategy, and identifying and developing new and differentiated products and services that deliver on Arctic Cat’s financial and strategic objectives.

Brad brings many years of related experience to this position as he spent 10 years in the Lawn & Garden industry before joining Arctic Cat in May 2000 as a District Sales Manager.

In October 2004, he was promoted to National Sales Manager (Canada). Brad was successful in rebuilding Arctic Cat’s Canadian dealer network raising Arctic Cat to a strong #2 position in Snowmobiles, and more than doubled the company’s ATV market share.

In May 2008, he was named North American Sales Director where he focused on strengthening the Sales Team and dealer network while growing Arctic Cat’s market share for both Snowmobiles and ATVs during the most challenging economic times.

Brad grew up in Canada in the Power sports business, working with and around Snowmobiles his entire life. He worked in a family dealership for more than 18 years starting at the age of 7. Brad even began racing at the age of 6 on an Arctic Cat Kitty Cat.

About Arctic Cat – Arctic Cat Inc., based in Thief River Falls, Minn., designs, engineers, manufactures and markets all-terrain vehicles (ATVs) and snowmobiles under the Arctic Cat brand name, as well as related parts, garments and accessories. Its common stock is traded on the Nasdaq National Market under the ticker symbol “ACAT.” More information about Arctic Cat and its products is available on the Internet at www.arcticcat.com.