LePage and Simons Shine North of the Border 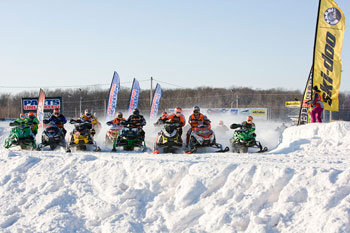 A cloudy sky and snow flurries characterized the early hours of the Saturday program of the AMSOIL Championship Snocross Series at the Grand Prix Ski-Doo de Valcourt, in the Eastern Townships of Québec.

With several drivers from the SCM, CSRA and Rock Maple circuits attending the event, a total of 62 entries were tallied for the two-featured races of the day, Semi-Pro Open and Pro Super Stock.

The Semi-Pro Open First Round produced at least one surprise, as Darrin Mees (Ski-doo) from Setanket, New York held off Dan Ebert (Arctic Cat) in the first round of qualifying. In other qualifying action, Bobby LePage (Polaris) won his flight; Tim Tremblay (Ski-doo) crossed the line first in front of his home crowd with a strong lead over Ryan Carey (Polaris); and the Swedish sensation Christian Salemark won his qualifier handily.

The Pro Super Stock first round followed without delay as bright sun was finally shining over Valcourt and its circuit Yvon Duhamel. Shaun Crapo (Polaris) took instantly the lead in the first heat, ahead of Brett Turcotte (Arctic Cat) and Bobby LePage (Polaris); T.J. Gulla and Garth Kaufman (Arctic Cat) led the second heat with Malinoski as a distant third.

Ryan Simons went quickly off the block and took the lead of the third heat followed by Levi LaVallee. Behind them, an interesting battle took shape involving Brett Bender, Dave Allard (Ski-doo) and Dave Asselin, the leader of the Québec circuit. Bender broke halfway into the race and Asselin move to third keeping behind fellow Quebecer and ISOC regular Allard.

The long and fast Valcourt track didn’t produced any major battles during the qualifying rounds, despite its character of several tight corners, but would retribute the spectators later in the day. Morning flurries and clouds gave way to sunshine when the Pro Super Stock final drew to the line.

At the green, Ryan Simons bolted out of the gate and quickly established himself as a strong leader after the first corner and through the long washboard section. On his heels, T.J Gulla rode a determined race all they way to the checkered but could not overtake Simons. LaVallee finished as a distant third.

“It was a fun race,” said the Albertan Simons after the race. “I love to battle with TJ and I could feel he was right behind me the entire race. He gained ground on me in the corners but Arctic Cat was wicked fast in the straight sections and it was well suited for this track.” The win for Simons was his first at Valcourt since he first raced there in 2003.

The Semi Pro Open scheduled for the end of the program was also a spectacular final animated mainly by local star Tim Tremblay. The Ski-Doo driver left the gate just behind eventual winner Bobby LePage and never let him breath a second.

Tremblay came close to pass the leader on at least four occasions, but was unable to make it stick. At mid-race, the challenger tangled with LePage and was forced off the track. Tremblay however, managed to get back on track keeping his second place position and one again put the head on LePage.

“I really wished to win. But I’m feeling good about tomorrow and I’m confident the Super Stock final will be mine”, said a confident Tremblay who despite LePage’s win took the lead in the Semi-Pro Open year-end standings.

Supertrax Onlinehttps://new.supertraxmag.com
Check back frequently for new content and follow us on social media!
Previous articleSo You Want to Be a Racer Girl?
Next articleSnowmobiling in the Eastern Townships