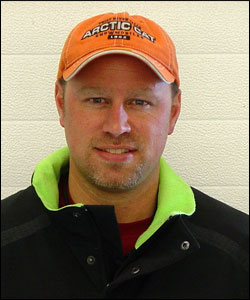 With fifteen years of experience working hands-on with some of the industry’s best snowmobile racers, Team Arctic riders from across the country will immediately benefit from his knowledge and experience.

Chris Twomey, Arctic Cat CEO said, “Mike has been mentored, as well as worked with, some of the brightest stars in the snowmobile industry. Speaking for myself and Arctic Cat, I believe Mike will help Team Arctic racers dominate all forms of snowmobile racing with his experience and love for the sport.”

Kloety was lead mechanic for Kirk Hibbert during Hibbert’s reign as the most dominant terrain racer in the mid-’90s, during which time he won five straight ISOC Championships, Jackson Hole King of the Mountain titles and numerous individual wins in cross-country, snocross and hillclimb.

Kloety’s transition will be easier as he carried the role of Assistant Race Manager, working closely with Russ Ebert on Team Arctic’s future plans for several months.

Mike isn’t kicking back by no means, he said, “Making sure Team Arctic has the best snow racing program is not a small task. We’ve got a potent group of racers that continue to dominate wherever they go; the goal is to win everything! When asked how Team Arctic Cat will tackle next season, “We have a simple recipe for success. When you have talented riders, a dedicated technical support staff and world class engineers designing the best Sno Pro race sleds, the ingredients for winning are easy.”

The Team Arctic race staff will remain the same, Kloety adds, “Dawn Haugen, Al Shimpa and Corey Berberich each have a minimum of 12 years experience with the sport of snowmobile racing at Arctic Cat. There isn’t a more passionate group of talent at an OEM level to help racers win!”

Supertrax Onlinehttps://www.supertraxmag.com
Check back frequently for new content and follow us on social media!
Previous articleWhich Cat?
Next articleWin ONE of SEVEN Amazing Snowmobile Getaways!