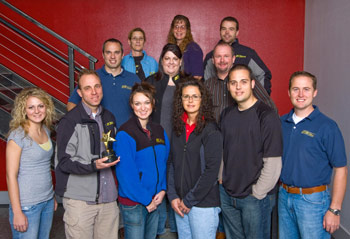 For a company with a small window of opportunity to market its product (September through December), Klim USA has made that window shine.

Because many people in the apparel industry might not know much about the snowmobiling and off-road motorcycle gear market, this Rigby, ID-based manufacturer felt inspired to self-nominate for the All-Star Award, according to John Summers, marketing manager with Klim USA. What it has accomplished in its niche has easily earned it the award.

Klim USA began as Teton Outfitters, a producer of custom clothing for people who made their living in the outdoors, such as search and rescue workers and ski-lift operators. The company queried many a worker to learn what they’d like to see in a product, and crafted clothing to meet those needs.

Its activities led the company to uncover an unserved niche in the outerwear marketplace: the snowmobile market. While the snowmobile industry had evolved dramatically — snowmobiles were more technologically advanced, and many riders were taking the sport to a much more extreme level — apparel for snowmobiling had not kept pace with the industry.

“Early on, we noted how outmoded the first snowmobile clothing was,” says Summers. “It remained heavily insulated, lacked waterproofing and tended to be ill-suited for the backcountry situations people now find themselves in, as machines take them into territory even more remote.”

In 1999, Teton launched Klim USA, targeted specifically to the snowmobiler. The clothing, to a great extent, has become survival gear, and that’s how the company (now known more by its brand name, Klim) now views its products.

The company has taken the market out of the “dark ages,” says Summers, with new technology that includes, among other things, a layering system that Klim developed specifically for the snowmobiling market, and comfort mapping, put in place this year, which more effectively controls rider comfort levels.

The company also has worked diligently to educate its customers about synthetic fabrics and their ability to transport moisture away from the body.

Taking out the middleman

When Klim USA introduced its first line, it had to build its customer base from scratch. Traditionally, snowmobile apparel and equipment had been sold through distributors, but Klim wanted to skip the middleman and go straight to the dealership so that it could be closer to the customer.

“By going through a distributor you lose that communication with the dealership to some degree,” says Summers.

In 1999-2000, the first winter of its operations, Klim landed five customers. Today the company sells to 450 dealerships, from which it receives steady feedback about its products that it plows back into development.

Now it’s possible to see Klim USA’s snowmobile apparel line worn by ski-resort operators and those employed in other outdoor occupations. Years ago, Summers explains, this never happened because snowmobiling apparel was extremely bulky and also featured designs such as checkerboard and flame patterns that did not lend themselves to crossover applications.

Now the company takes many of its design and technology cues from other areas of the outdoor industry, which has come a long way in recent years both in the areas of fashion and performance.

In its efforts to take control of the wheel with respect to performance, Klim partnered with GORE-TEX, which has been instrumental in helping the company to develop and improve fiber and fabric technologies. This year, for example, through a concept called comfort mapping, Klim has designed a jacket around the specific needs of the body.

While it “sounds like a ‘no-brainer,'” it’s not always top of mind when designing apparel, says Summers. “There are parts of the body that sweat more, areas where heat needs to escape. GORE-Tex has helped us understand this and, from a technological standpoint, worked with us to place more insulation in certain areas that need it, and less in other areas where it may not be called for.” The result is a jacket with a wider comfort range, he says.

“A lot of people who don our gear compare it to wearing pajamas — it just doesn’t feel like you have anything on. To put it another way, if you don’t notice your clothing, that is a good thing. And when you do notice it, it usually means you’re cold, wet, too warm or uncomfortable.”

As for footwear, Summers notes that traditional snowmobile boots left feet perpetually wet — a problem that has been solved thanks to GORE-TEX, he says. “A lot of people don’t realize that when their feet get wet, it’s not coming from the outside in, but the other way around.”

In short, he says, there is a lot of innovation and technology going into the brand’s apparel and footwear to keep the wearer dry and comfortable.

From a business standpoint, Summers really believes information is key. The company has customized its Great Plains solution (now Microsoft Dynamics), to provide views into its product-line adoption, which it can sort by rep, by store, by product and so forth. The company can see what specific products its dealers are ordering and if those dealers carry, for example, 90 percent or 50 percent of Klim’s line.

The solution also allows Klim to create dashboards of relevant metrics that allow it to assess at any time how the company stands with relation to its goals.

Integrated with Dynamics is Microsoft CRM 4.0, which the company also customized to its needs, and which it uses to keep on top of its dealers and prospects. It has also recently completed implementation of the Dynamics’ warehousing solution, Maximum Data, which has allowed the company to bar code all inventory and shipments. Now, instead of requiring a human to compare a pick ticket to the product, the bar codes can simply be scanned.

“The information we’re able to derive with our technology is great. If you can create these metrics you can really understand what’s going on and make more sound decisions too,” says Summers. “For example, we know that with our GORE-TEX Adrenalin boot we had a 92 percent adoption within two years. This was the percentage of our dealers who had the boot within this length of time.”

The Klim USA philosophy is simple: Don’t design or build unless it produces a concrete benefit.