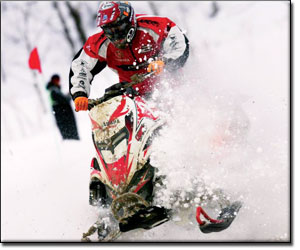 While Masafumi Terasaki took the fastest start in the first heat but Tomonori Matsuda (A) overtook him in the first corner. He was followed by Hironori Hayashi (S), Masaki Sasaki (S) and then Terasaki.

Terasaki, who was running fourth on the first lap, took a fall and was left behind. Other Yamaha riders entered the second lap with Nobuaki Eikura in 8th, Kiyotaka Kawagoe in 9th and Shinji Tozawa in 11th position. On that second lap it was Eikura who took a spill and lost several places.

In the third lap, Kawagoe’s 7th position made him Yamaha’s leading rider. In the top group, Tomosuke Sano (S) led the race but in the latter half Matsuda and Sasaki closed the gap so that by lap ten Matsuda had emerged in the lead.

Matsuda, however, took a tumble, giving Sano the lead once more. But Sasaki immediately grabbed first position and went on to win. Sano took 2nd and Matsuda finished 3rd.

Yamaha rider results: Kawagoe, who displayed stable riding throughout, finished 5th while Eikura, who had fallen, recovered to finish 6th. Although Tozawa was in 8th position at one stage he dropped two places in the latter half to finish 10th and Terasaki closed in to come 12th. Daishi Takamura did not compete in this round.

In the second heat, despite a good start by Eikura and Kawagoe, the two bumped into each other and lost ground as a result. Tozawa, however, dominated the scramble at the start and was followed by Terasaki.

The order at the end of the first lap was Tozawa, Matsuda, Hajime Matsuno (P) and Terasaki, but in the third lap Matsuda emerged in first. In contrast, Tozawa was gradually left behind, allowing Matsuda a runaway lead. Matsuda subsequently kept his hold on the lead to win, capturing his second overall victory this season.

In 2nd was Sano, who rose to second position in lap seven. In 3rd was Sano who battled with Seiichi Akutsu (S), and Akutsu eventually won out.

Although Tozawa managed to maintain second place until the middle stages, he later dropped down to 5th position and a battle developed with Terasaki who was in 6th.

Terasaki won this to take 5th while Tozawa took 6th place. Kawagoe was behind in 12th position in the early stages but ran an aggressive race to finish in 9th place.

Eikura, who was running in 9th position, ran off the course on lap six, which caused him to drop back to a 12th place finish.