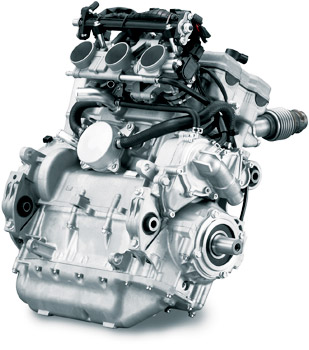 The engine used in the new Luxo-Yam twofer is not the Vector mill and it is not the Nytro mill.

The engine is based on the same triple cylinder platform as both the Veck and the Nytro. However, in Venture trim the mill uses EFI and some interesting cam tuning to pump-up low end squeeze.

This motor is a torque-meister at trail speed and seems perfectly suited to its calling – hauling two people and their gear. However, the engine has imposing top end thrust producing a claimed 126hp, six more than the carbureted Vector engine.

Wouldn’t it make sense for Yamaha to add EFI to the Vector? While they’re at it, why not just stuff this tuned-up version of the triple 1000 into the Vector.

It’s no secret the Vector has been under increasing horsepower pressure from both 2-stroke and 4-stroke competition.

Supertrax Onlinehttps://www.supertraxmag.com
Check back frequently for new content and follow us on social media!
Previous articlePalin Puts Arctic Cat In The Spotlight
Next articlePOLL RESULTS