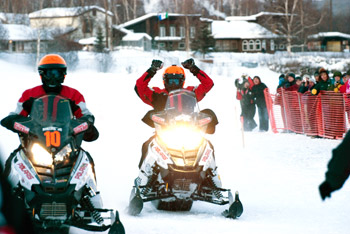 Winners Outsprint and Outlast the Competition to Win $50,000

Huntington and Olds completed the grueling, weather-battered 2,000-mile race 18 minutes ahead of the runners-up. Four of the top seven Pro Class teams to finish were on Polaris snowmobiles, including the fourth-place team of David Branhold and Matthew Spernak, and fifth-place team of Ryan Sottosanti and Andrew Zwink. Aaron Marks and Arnold Marks finished seventh.

Huntington and Olds were in the lead early on the final day of racing, which featured the top teams sprinting toward Fairbanks on the twisting Yukon River. But near the Manley checkpoint, about 300 miles from the finish, Huntington and Olds had to stop to replace a broken belt.

The team of Todd Palin and Eric Quam passed them for the lead and built up a 17-minute advantage at Nenana, the final major checkpoint before the finish.

But Palin’s sled developed ski trouble that his team had to stop to repair, and Huntington and Olds sped past to retake the lead and cruise into Fairbanks with their second-straight Iron Dog win.

Olds said the 600 RUSH sleds delivered outstanding performance throughout the race, which featured some of the deepest snow and worst weather in history.

“These were excellent machines for us,” he said of the sleds with the PRO-RIDE progressive rate rear suspension. “We didn’t have to turn a wrench on them. They were so durable.”

Competitors in the 2011 Iron Dog encountered harsh winter weather at the race’s half-way point in Nome. Race teams were held in Nome for an extra day as the storm raged, and then proceeded to the coastal town of Unalakleet under a yellow flag to ensure teams made it safely beyond the reach of the raging ocean storm.

First run in 1984 (and won by the Polaris team of John Faeo and Rod Frank), the Iron Dog race has been run 27 times (it was cancelled in 2003). Polaris teams have won it 13 times, the most of any brand. Those wins include the past three races, as Polaris racers Huntington and Olds won the past two years, and Todd Minnick and Nick Olstad won in 2009. Only two teams in Iron Dog history have won three straight times, and Huntington and Olds will have their opportunity to achieve a three-peat in 2012.

The Iron Dog Ambassador program was introduced during the 2011 race, as a team of four Ambassadors on Polaris sleds rode the race course as a Trail Class team and spread goodwill and thanks to volunteers along the way.

The 2012 Iron Dog Ambassadors were:

Ivy rode a 2011 Switchback Dragon, while the other three Ambassadors rode the Switchback Adventures.

While Trail Teams traditionally end their race at the half-way point in Nome, the Ambassadors left Nome intending to run the second half of the race to spread goodwill.

A fierce winter storm near the coast forced them back to Nome, which they reached after a harrowing overnight battle through sea ice and ocean overflow.

The two-time Iron Dog race champions, Huntington and Olds, won $50,000 as the wining team, and also won public appreciation for their roles in the State of Alaska’s suicide prevention program.

Alaska has one of the nation’s highest suicide rates, per capita, and the Polaris racers worked with the state on a campaign to encourage residents, especially teens, to seek help if stresses mount in their lives.