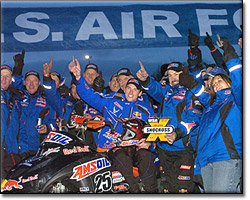 (Press Release) A bevy of talented drivers and the all-new 440 IQ Polaris racer kicked off the competitive snowmobile season this past weekend at the WSA Duluth National Snocross with an in your face performance by Polaris.

It was a level of podium prowess by Polaris not seen on the snowy hills of Spirit Mountain since the green flag first dropped there in 1992. The all-new 440 IQ racer, based upon the same intelligently designed IQ chassis found in the 2005 Fusion and 900 RMK, was clearly the one to beat on the crater filled course which until this year was tamed by the yellow and green horde.

In the six all-important classes of the weekend, Polaris racers captured 4 victories including a win by DJ eckstrom in the most prestigious race – Pro Open. It was a victory which clearly showed to the racing community the new Polaris 440 IQ can deliver on the claim of being the ultimate race track weapon.

Eckstrom also led the charge for Polaris in the Pro Stock ranks, capturing second place for another Polaris podium with TJ Gulla taking the fourth position. Equally important was the dominance displayed by Polaris in the highly competitive support classes where participation numbers rank in the hundreds.

Whether leading from the drop of the green or slicing through the pack, the new 440 IQ racer demonstrated a level of control and predictability in the nasty terrain unlike any other sled on the track.

Supertrax Onlinehttps://new.supertraxmag.com
Check back frequently for new content and follow us on social media!
Previous articleSnowmobiler.com is Online
Next articleFloating the Valves