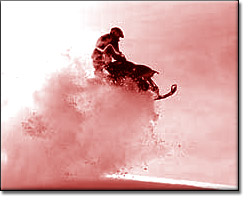 Some will argue this was inevitable. Redline Snowmobiles filed for Chapter 11 bankruptcy protection at the end of August. Late last fall Redline had exhausted $10 million (US) rose in a public stock offering 18 months earlier.

As the well was running dry, another $2 million in new capital was raised accompanied by some unsettling words relating to the company’s future? However, the $2 million cash injection was supposed to be enough to capitalize the assembly of about “500 production snowmobile units”. We did the math on this equation and couldn’t make it work.

According to one of the many releases from Redline over the past ten months, the company had, up until the spring of 2004, actually produced and delivered about 40 to 50 Revolt 800s.

Strangely, we were never able to locate a single production sled on either side of the border. Amplifying the mystery, Supertrax Co-Publisher, CJ Ramstad, made a trip to Redline’s production facility last April looking for evidence of snowmobile assembly.

The result of his search netted no evidence whatsoever of snowmobiles or the equipment required to produce the same. We empathize with the people who worked so hard to see the Revolt come to production and no doubt dedicated a sizable chunk of their careers and lives to the cause.

While they must be terribly disappointed at these recent events, we understand there are a number of well known OEM vendors feeling the hurt in their pocketbooks after committing to substantial parts orders.