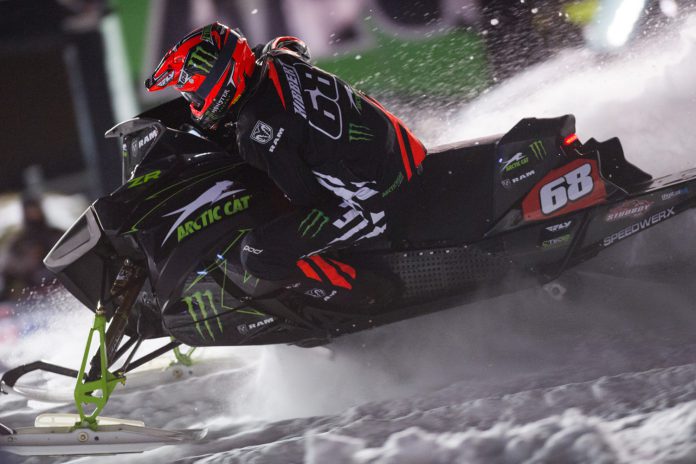 January 8, 2018 – Tucker Hibbert extended his points lead in the ISOC National Snocross Pro points championship at rounds five and six in Shakopee, Minn. Hibbert had a strong weekend of racing at the Canterbury Park National winning all four of his qualifying rounds and the final event on night two.

Going 1-1 in qualifying Friday night, Hibbert had last pick on the start line for the 15-rider, 20-lap final due to the inverted start procedure. He got pinched off the start but slotted into a position he felt comfortable with going into the first corner. Moments later, a rider from the inside clipped him, sending him off the track and into the guardrail. Unharmed physically, he returned to his sled to find the handlebars broke in half. Knowing every point counts for the year-end championship, he re-entered the race and completed as many laps as he safely was able to finish a respectable 12th place.

Hibbert stormed into Saturday confident and focused on winning every time he hit the track. After winning both his qualifying rounds again, he took a cautious approach to the start of the 15-rider, 14-lap final. He grabbed a fifth place start and within a half of a lap moved into third. Searching for fast lines, he found a solid spot for passing and used the same move to get past the two riders in front of him on laps four and six. Once out front, he rode unchallenged to take the win.

Hibbert now has a 34-point lead over second place in the points championship. The ISOC National Snocross tour will take a weekend break before heading to Deadwood, SD January 19-20. To stay up-to-date with Hibbert, visit tucker-hibbert.com.

Tucker Hibbert – #68 Monster Energy / Arctic Cat / Ram Truck
“I’m really happy about the weekend. Extending my points lead is the main goal and we were able to do that. I didn’t have a great race on Friday in the main but other than that, I’m stoked on my performance and how I felt.”

Friday night recap:
“I won both my qualifiers so I had last pick on the front row. I was stuck on the outside. I didn’t get out front off the line but felt good about where I was going into the first turn. Then, all of a sudden, I got bumped by someone from the inside. It pushed me to the outside of the track and I crashed into the guardrail. I ran to my sled to try and get going right away and realized my handlebars were broken. It was a big disappointment and I didn’t know what to do. After thinking about it and talking to my dad quick, I decided to get on the track and see what I could do. I wasn’t able to race at full speed but still got around the track. It wasn’t the race I was looking for but I did what I had to do to salvage points.”

Saturday night recap:
“I had some extra motivation after what happened Friday night. I was really focused on my starts so I wouldn’t put myself in a bad position. I felt really good all night and charged hard to win the qualifiers and the final.”

Overall thoughts on the season:
“I feel really good. Extending my points lead each weekend is the main goal. We have a lot of racing left. I feel really confident in my sled, my team and my performances. We’re in a good position for the rest of the season and will be working hard to make sure we keep having success.”

Supertrax Onlinehttps://new.supertraxmag.com
Check back frequently for new content and follow us on social media!
Previous articleLOW COST OF SNOWMOBILING
Next articleIS E-TEC REALLY THAT FAR AHEAD?