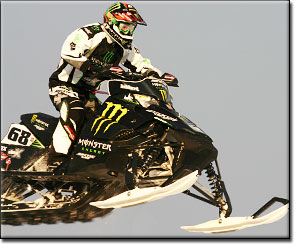 Last weekend Tucker Hibbert got the holeshot and dominated the 2008 X-Games Snocross final with a dramatic 5-second lead over the rest of the field.

His Monster Energy sponsored Arctic Cat Sno-Pro led the field from beginning to end and Tucker once again demonstrated he is the force to beat in this exciting racing venue.

His incredibly smooth style and jaw dropping big air shots were exactly what millions of national network TV viewers got to see and, although the competition never really challenged him closely, Tucker continued to put on a dynamic show lap after lap.

Canadian Brett Turcotte on a Ski-Doo and Dennis Eckstrom on a Polaris shared the podium while Yamaha’s Steve Taylor made a very strong showing for fourth place.

Actually the race for second, third and fourth was as exciting as Tucker’s air show with positions swapped several times throughout the final.