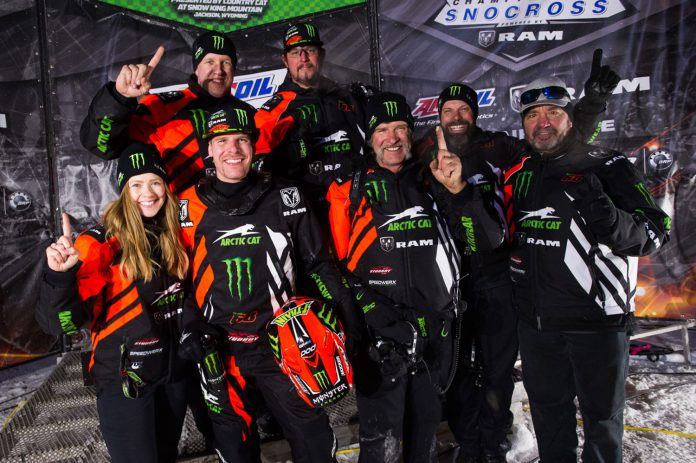 Friday night’s Pro final was one for the record books. After a 12th place start in the 15-rider, 22-lap main event, Hibbert put on one of the most exciting comeback rides of his career. Pushing hard early, he moved into ninth but then struggled to find opportunities to pass or make up time on the group in front of him. Something clicked on lap 10 and he started dicing through the field.

With three laps to go, he passed for second and had leader no. 43 Logan Christian in sight. He followed Christian closely for one lap and in the final corner of the final lap, snuck underneath him at the top of the hill, made the pass stick and charged down the hill to the finish to take the win.

Hibbert had the race he was looking for Saturday night. Second off the line in the 15-rider, 22-lap main event, he took over the lead in same corner he passed Christian the night before, and was never challenged to complete the weekend sweep.

Hibbert now has a 25-point lead over second place in the points championship.

The snocross tour takes a break for the holidays and fires back up January 5-6, just outside of Minneapolis, at Canterbury Park. Stay up-to-date with Hibbert and his preparations for the rest of the season by visiting tucker-hibbert.com.

On his win Friday Night:

“I got great starts in my qualifiers so I was planning to get a great start in the main event. I was late on my reaction time and got shuffled to the back. It was a really challenging race to have to pass that many riders and deal with the snow dust and roost. The track changed a lot. Halfway through the race I was able to pick up on some really good lines, got my momentum rolling and started reeling in the lead group. I didn’t know who was in the lead then I got a pit board to pass no. 43 on the last lap. I still didn’t know I won until after I crossed the finish line. I just kept pushing and tried to pass as many riders as I could.”

On his win Saturday night:

“Tonight’s main event was a lot less hectic for me and easier. Starting up front, I didn’t have to deal with passing all the riders and eating all the snow dust and roost. I was pushing really hard when I didn’t have people in front of me but when I got around lappers, I’d be cautious and take it easy. I was managing the race based on what was in front of me and going on.”

On taking the weekend sweep and being undefeated this winter:

“I’m really happy to win all the main events so far and having a good points lead going into the break. It gives us (the team) a lot of confidence and the motivation to push hard so we can carry this momentum through the rest of the season.”

On his welcome back to the Jackson Hole area:

“I kind of knew that a lot of my friends and family from this area would be here but was a little surprised by all the people who showed up. It was awesome to have that kind of support and see all the people I don’t usually see at the racetrack.”